This afternoon I was updating one of my old patterns, which included Dritz Luxury Chenille and decided to take a bit of time to learn more about this yarn.    Here's what I learned . . . 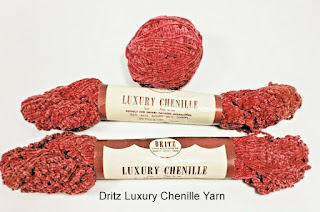 Photo from Ebay seller Elvin41
Dritz Luxury Chenille - A Velvety yarn in colors, or combinations, for personal accessories.   The yarn, containing 72 yards per skein, is 80% Rayon (for luster) and 20% cotton (for additional strength).

Luxury Chenille was introduced to the market in 1950 with the first newspaper promotion advertisement appearing in May.   The introductory price was 49 cents/skein.  The yarn was first sold at 49 cents, no doubt to span interest, and went to the regular price of 79 cents within a month. 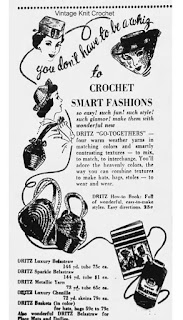 In 1951, Dritz issued a pattern book, and a promotion blitz on four of their popular yarns on the market.
In these time periods, the yarn makers typically published pattern books to promote their product.  Dritz did not follow this course.   Instead, they printed pattern mail away offers in newspapers and published their patterns in the monthly magazines, such as McCalls Needlecraft and Modern Knitting. 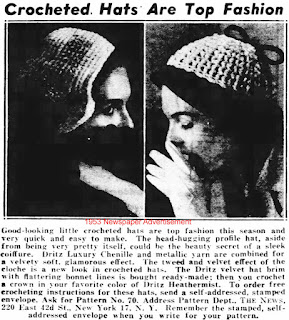 Dritz also ran advertisements (in the format of an actual newspaper article) for mail order patterns for  featuring their yarn.   In this case, the pattern(s) include Dritz Luxury Yarn.   The majority of their patterns were distributed through magazines.   Most of the patterns in my shop coming from Modern Knitting and McCalls Needlecraft. 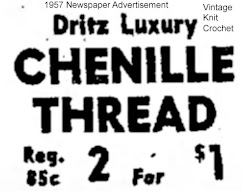 The Luxury Chenille peaked at 85 cents a skein, and at it's final appearance in 1957 dropped down to 50 cents.   Why it was discontinued ... well, I of course, do not know.   However, this was a novelty yarn for the time period and it's profitability was most likely of issue.
There are many vintage patterns calling for Dritz Luxury Yarn.   I have a number in my shop, as well as others out there in internet land.  So, what do you substitute?   Any chunky chenille yarn that meets the pattern stitch gauge will fit the bill.   Debra, over at Vintage Crafts suggests Lion Brand Chenille Yarn.
Okay, it's time for a break and then I'll get back to pattern processing.
Thanks for dropping by,  Lorrie
Lorrie Vintage Knit Crochet at 7:48 PM No comments: