When writing a post for one of the vintage yarns, I always like to start with a picture of the yarn itself, which I can usually locate from one of the Ebay or Etsy sellers.  But, in this case - Minerva Milady Knitting Yarn, not a single picture of the actual yarn has been found.   (I have set up a Google Alert, should one appear).

What I have learned ....
Lees Minerva introduced the brand early 1933 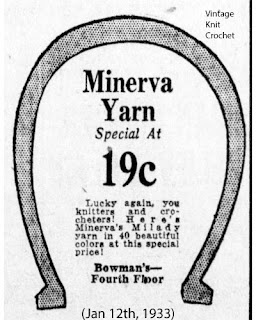 This yarn was 100% wool, sold in 4-oz skeins in 40 beautiful colors -- quite a variety of colors for first introduction. 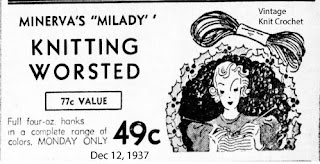 The yarn apparently proves itself successful, gaining a full 30 cents from the introductory price of 19 cents.    The yarn was touted for suits, coats, dresses, sweaters and afghans.  Lees Minerva published a number of misses clothing / accessory patterns through the 30's, so I'd assume several included patterns calling for this yarn. 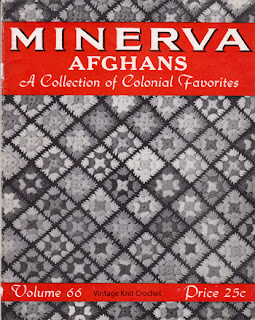 In 1943, Lees Minerva published pattern book - Minerva Afghans - Vol 66 which featured the Milady Yarn in each pattern.  These patterns are in the shop, should you be interested in looking.

During World War II, sale advertisements dwindled in newspapers, which leads me to assume manufacturing may have been discontinued early 1940's as wool supply to common market became scarce. 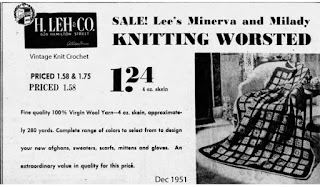 There was a brief marketing sprint at the end of the 1940's, ending in 1951,  which I assume, was final sell-off of the product line.    The pattern featured in this advertisement is Charleston Block - a colorful classic Granny.

And ... that's all I know.   But, should I come across other books or information about this yarn, I'll update this post.  If you should happen to know more, I'd appreciate your sharing!

Some time back I created spreadsheets to keep track of my mail order collection.  This step, although a bit time consuming, has been quite an eye opener.   I'll start posting some of these tidbits ... just in case anyone 'out there' should be interested.

When a Mail Order pattern proved popular, it was published multiple years and/or under multiple numbers.  At each release, the pattern description would change. Lets take the example of the popular Crochet Star Medallion. 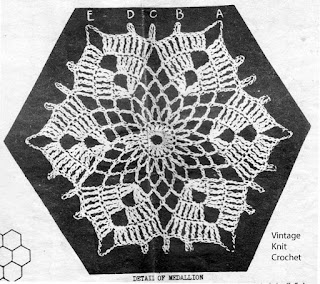 It's an attractive hexagon medallion in star motif that will measure 3-1/2 or 5-1/2" depending upon thread. 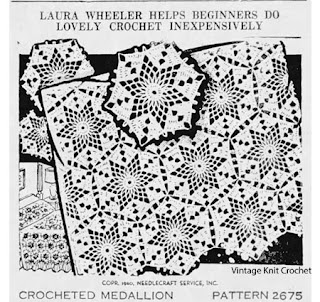 Laura Wheeler 2675:
This Design was first released in October of 1940.  "Can't you picture a spread of this lovely crocheted medallion enhancing your bedroom. It's a beginner choice indeed for it's so easy and works up so effectively".

And then again in March of 1941,  "Beginner's, here's crochet that will win you laurels. The easy medallion repeated makes a variety of accessories large and small, as you wish.Use string, it works up quickly. 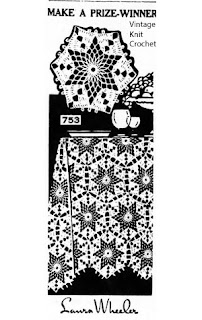 Laura Wheeler 753
Design 2675, although billed as a Medallion, as portrayed as a bedspread in this picture.  Here, the same design is shown as a tablecloth.
The pattern was released in July, 1947 - description:  "Star of all medallions! Easy to crochet, quick to memorize.  You'll love it's cobwebby beauty in a spread or cloth. Good pick-up work. The sky is the limit to the lovely accessories you can make".
Again in July, 1948, September 1948 and July 1949 - description:  "Don't wish on a star - just crochet this one instead! The accessories you long for are yours in no time with this easy medallion.  You can win prizes with this crochet at your fair".
And, one more time in 1950 - description: Star this medallion in your home. It rates applause any way you use it.  "You'll memorize it quickly, then it's pure fun to do. This is a wonderfully easy was to grace your home with heirloom luxuries"

Alice Brooks 7180
Here, the pattern has switched over to be marketed as Alice Brooks versus Laura Wheeler.  Also billed as a tablecloth, the table setting itself changed.
This Design version was released in June 1956, March 1957 - description: "You'll win prizes with this quick crochet medallion.  It lends itself to both fine cotton and string.  Make small articles or plan a bedspread or tablecloth".
Again in December 1958, February 1959, February 1960 and May 1961 - Description: This prize medallion is especially good for large and small articles: scarves, mats, pillows, bedspreads.  A quick, thrift way to acquire lovely accessories",

Now, I've found one other occurrence of this exact pattern under the name of American Weekly. 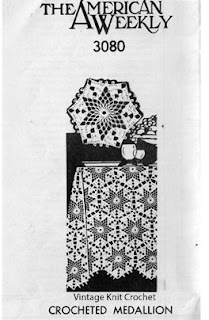 American Weekly 3080
Patterns branded American Weekly appeared only in the Sunday weekly circular of the same name.  I do not (currently) know the relationship between The American Weekly and Needlecraft Services, but assume advertising space was purchased and the pattern was simply branded.    I (currently) have no way to date the publications of these patterns.

Are their more occurrences where this pattern was marketed under different numbers and descriptions?  Possible.   These are simple the patterns that I've purchased, processed and am aware of.   Should I discover more, I'll update this post.

It's obvious this was a popular, and well selling design.  And, for very apparent reasons - it's a quite lovely medallion.    Should you be interested in the pattern, it is available in my shop - links under pattern pictures.  I've been asked, if a pattern is the same, why do I list it multiple times.   That's a very easy answer.   Sometimes one might be searching for a pattern of a specific number.

Well, I imagine, if you've made it to here, you've read enough about this particular pattern and I'll move on to something else!
Lorrie Vintage Knit Crochet at 8:23 AM No comments: