Knitting in a Big Way, An Elephant Story

I've been working my way through the Fall-Winter 1951-1952 issue of McCalls Needlecraft Magazine.  I always enjoy these magazines for their variety and periodic surprises.   Like this one, tucked nicely on Page 124. 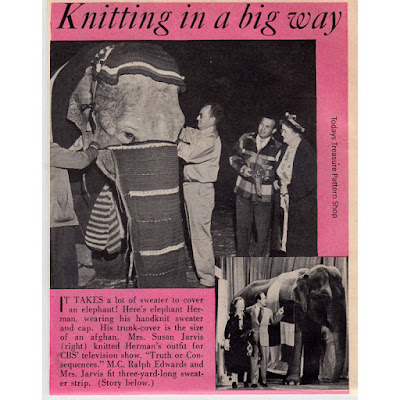 Now, I'd don't usually copy paste an entire story here in the blog, but this one is just too delightful to mess with.   If you have the time, it is definitely a fun read.

" If, halfway through a sweater for a size 46 husband, you have ever said wearily, "I might as well be knitting for an elephant!" you may be interested to know that Mrs. Susan Jarvis, of 1716 North Edgemont Street, Los Angeles, California, the pleasant-faced, motherly woman in the photo, actually did knit a sweater for a Ringling Brothers circus elephant. Mrs. Jarvis made the sweater—probably the largest in history —as her "consequence" on CBS' freakish television show, "Truth or Consequences."

One night this past year, Ralph Edwards, Master of Ceremonies of "Truth or Consequences," asked for a lady who could knit. Mrs. Jarvis,, in the audience, volunteered and was selected as the lucky contestant. When she missed her question, Edwards asked if she would knit a sweater for a friend of his, and puckishly ushered out Herman (elephant photo), presented stunned Mrs. Jarvis with a wheel barrowful of wools and told her to go to work.

Naturally, the audience roared. Whereupon Mrs. Jarvis, her dander up, accepted the challenge to her prowess as a knitter and announced that she would not only knit a sweater but a complete outfit.

With this information in hand, Mrs. Jarvis was set to go. The question; 'Where do you start with an elephant? bothered her. She decided to make a waistband first. In a week she had completed a strip 8 inches wide to go around Herman's waist with 8 inches for button lap. It fitted. Knitting for an elephant took on a more reasonable aspect. From there on, the job went smoothly.

To keep the work from becoming monotonous, she varied her colors from week to week. The entire project took thirteen weeks. Mrs. Jarvis grew to love her mammoth knitting chore and felt really sorry when the last row was bound off and Herman ready to be decked out in his knitted finery as you see him above.  "

I hope you enjoy the story as much as I do.
Thanks for dropping by,