The Casa-Laine Yarn takes us way back to 1943 .... it was from the Silent Generation, you might say.  The yarn was introduced in early 1943 to a fairly large market across the United States. 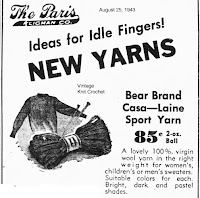 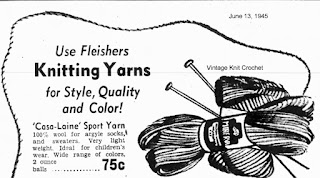 Casa-Laine was marketed under both the Bear Brand and Fleishers label.   Now one could ask why same yarn under two names?   I, of course, do not know, but would guess this would be to catch preference buyers ... some might have allegiance to Fleishers or Bear Brand?  Note:  Some patterns also indicate that the yarn was marketed under the Bucilla Brand name as well. 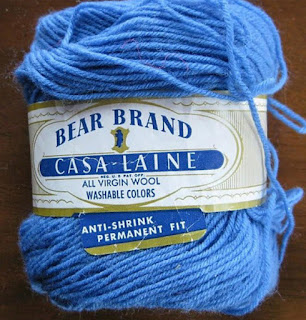 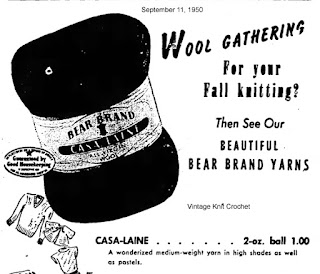 By 1950, Casa-Laine now 'proudly' bears the coveted Good Housekeeping Seal of Approval.  As one would expect, the price is slowly inching up. 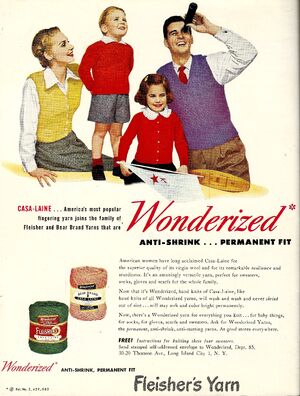 Photo from VintageYarnWiki
The yarn was also featured in full-page advertisements in a number of needlework magazines into the early 1960's. (I'm sure  I'll find more when I  start working my way through the magazine collection and will add them).  This yarn, no-doubt, was also featured in a number of pattern books by both Fleishers and Bear Brand.

And, sales and the newspaper promotions continued on into 1968.   And then, it was all over; for the next two years the only  references to  Casa-Laine are discounted and clearance sales to deplete the remaining shop inventories and completely disappeared by 1970.

The Casa-Laine brand had a good and long life ... 1949 to 1968.   It was a good solid product and I'm sure there are many interesting  patterns out there, there are deserving of a knit .... There are, of course, several in the shop, should you care to browse.

Ok, back to work.   Thanks for dropping by.
Lorrie Vintage Knit Crochet at 7:27 AM