How about a bit of Anne Cabot trivia?   The brand of Anne Cabot, often referred to as Mrs. Anne Cabot's Needlecraft Corner, entered the pattern market in March 1941 with an assortment of sewing, crochet and embroidery patterns.   This was a syndicated column that began in Iola Kansas and quickly spread across major metropolitan areas.

The Anne Cabot brand had touch competition from the likes of the Alice Brooks and Laura Wheeler brands, which also were advertising Mail Order Patterns that were established in 1939 and had a strong customer following.

In an attempt to gain following, Anne Cabot offered a coupon promotion on their individual patterns. 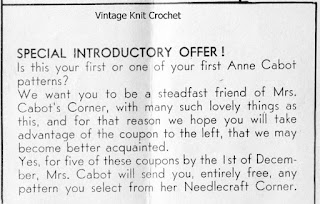 This SPECIAL INTRODUCTORY OFFER was printed in the bottom corner of the individual patterns.   The concept being, purchase five patterns and get one free with an expiration of December 1st, 1941.  In this particular instance, the pattern was a nursery rug with bunny cross stitch marketed under No 5228. 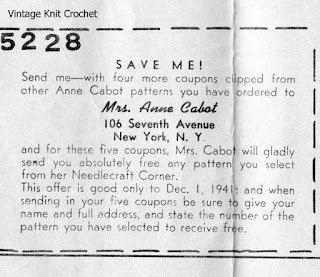 Simply collect the coupons printed on your purchased patterns and mail  in, with a note showing your requested pattern, to the New York city address.    The value of this free pattern ... 10 cents, which was the cost of the patterns purchased in this 1941 time frame.
To date, among the mail order needlework pattern suppliers, this is the 'Promotional Sale' that I've seen.   I wouldn't be surprised, however, if others show up.
Thanks for dropping,
Lorrie
Lorrie Vintage Knit Crochet at 2:26 PM