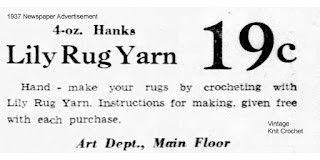 "A wonderfully soft, thick, fine quality 100% cotton rug yarn in rich, fast, colors.  This yarn is widely used for all types of crochet work such as hats and bags, bedroom slippers, pot holders, etc.  Also, it is widely used for making Fluff, Pompom, Hooked, Crocheted and Woven Rugs".
The yarn was introduced in 4-oz skeins. 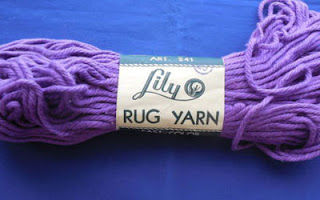 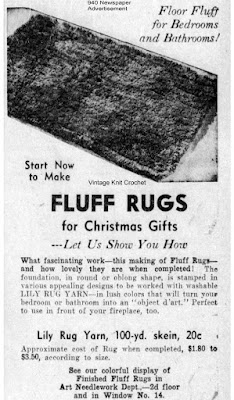 Into the early 1940's, Lily Mills promoted the different uses for their Rug Yarn.  As was the norm for this time period, department stores also set up instruction areas to teach you the techniques and giving free patterns with yarn purchase. Crocheting hats and bags was another popular instructions. 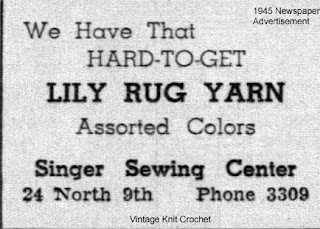 During WWII cotton became scarce, creating a quite a boom for those stores that were able to obtain leftover stocks.   It was during this time period that the nylons and synthetics started gaining their popularity.   Of course, when the war ended and cotton again became available, their marketing (and sales) hit new time highs.   It has to be noted, of course, that they were not alone in this market ... the greatest competition being American Thread's Aunt Lydia's Heavy Rug Yarn. 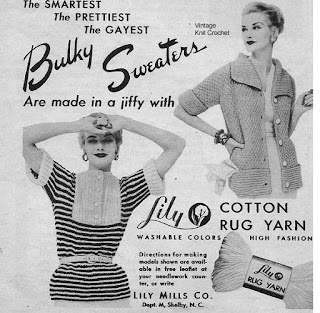 The product promotion began dwindling in the early 1970's, and by 1975 had entirely left the market.  Now, that's certainly not to say that rug yarns left the market.   Newer yarns were marketed employing additional fibers .... versus 100% cotton.

During it's run, Lily Mills produced several pattern books that directly promoted this yarn, as well as offered patterns through leaflets distributed through shops and the popular Needlework magazines.  I've reviewed one of these books - Smart Little Toppers - in the Shoptalk Blog.

There are, of course, a number of patterns calling for Lily Rug Yarn, Art 241, in the shop if you'd care to browse.
Thanks for dropping by.
Lorrie Vintage Knit Crochet at 5:15 PM