I'm processing a Free Download for the shop this afternoon for a crocheted hot plate mat from 1949. 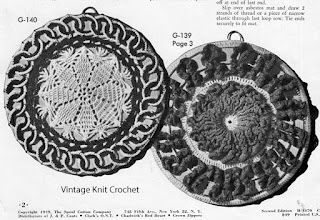 Of course, I've seen the material requirement before, but had never put much thought into it .... 8-1/2 inch Asbestos Mat.   Now, I have a few of these mat patterns in the shop, which have never sold, which made we wonder if these have lost their vintage interest because of these Asbestos Mats.

Asbestos Mats made their appearance back in the 1890's. 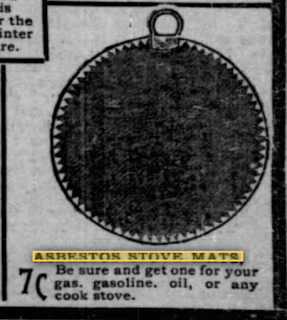 These mats were made in two parts - the mat itself being a sturdy cardboard with the top layer being an asbestos layer called Millboard.  Asbestos was fireproof and absorbed heat, making it an asset for cooking.  Remember, cooking in the late 1800's was a quite rustic affair.

As we moved into the 1920/30's, many homes now had kitchen stoves with burners which allowed these mats to become more decorative.  What woman didn't want a more decorative kitchen!  Initially, decorative covers were made using macrame cords, but then moved towards the influx of colorful crochet cottons. 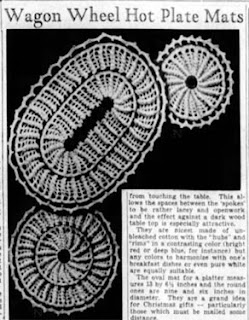 Patterns for these mats began appearing in newspapers in 1935; first offerings being from the Women's Service Bureau, quickly followed by the Mail Order companies and, of course, the promotional pattern books and leaflets of the thread manufacturers.

Asbestos mats soon evolved to meet many household - heat conducive - needs.  The product was found, not only in mats and table pads, but our appliances, insulation and so much more.

Asbestos use continued into the 1970's, when it was determined to be a carcinogen and removed from the marketplace.

Well, let's get me back on focus here .... these vintage hot plate cover patterns that call for the asbestos mats.   You can use the covers without the mat insert; many mats pattern do not call for it. 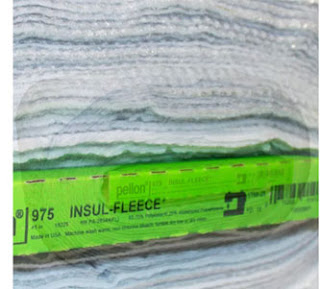 Or, if you need a heat buffer to put hot pots on your tables, there's a great substitute in the form of Pellon.  This particular interfacing - Pellon 975 - will function well, as will a number of others interfacing you'll find in your sewing shops.    Just cut the interfacing to your desired size.  The primary different between interfacing substitutes and the obsolete asbestos mats is the sturdy factor.

So, should you be partial to the particular design of a hot plate mat cover, don't discount your creativity over the asbestos mat.

Lorrie Vintage Knit Crochet at 7:51 AM