Working my way through a lovely Bucilla pattern book - Picturesque Hats - this morning, I decided I'd take a moment to learn about one of the yarns.   In this case, Bucilla Angel Crepe.   Now, as many of you may know, Bucilla, Bear Brand and Fleishers (under the original umbrella of Bernhard Ulman).  This means, all three companies marketed this yarn.  Yep, same yarn, typically the exact same price, just different brands, 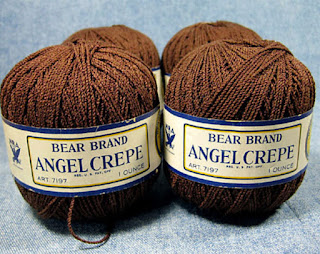 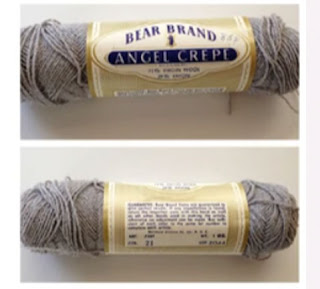 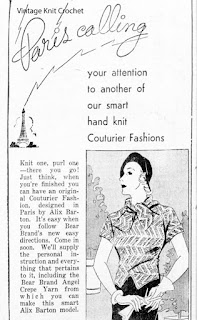 Bear Brand started the advertising blitz in the form of pattern offerings.   Introduce an highly desired fashion pattern free of charge and you'll buy the yarn to make it. 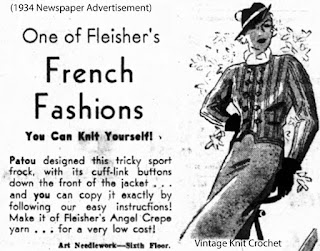 Fleishers were following the same practice. 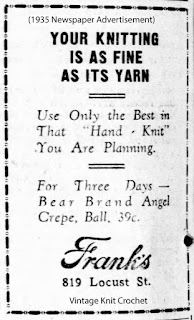 Several months later - early 1935, the advertisements began displaying the price.   The yarn and it's pricing struggling to maintain an audience through the 1940's.   Remember, this was WWII era with times being financially tough and many women working long hours without time for dress knitting, 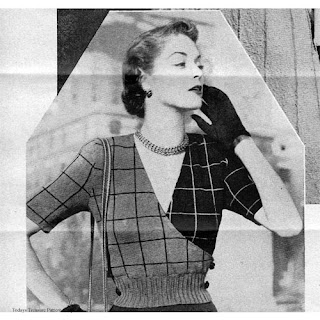 Checkered Blouse
Late 1940's into the 1950's, the Bernhard companies continued marketing their Angel Crepe brand, but primarily through magazines.   They would place an advertisement in the magazine, which would then publish one or two of their patterns to entice the reader to purchase.  This blouse appeared in the 1950 issue of Smart Knitting Magazine, along with a couple dresses.   I've also seen advertisements from Modern Knitting and Modern Needlecraft magazines. 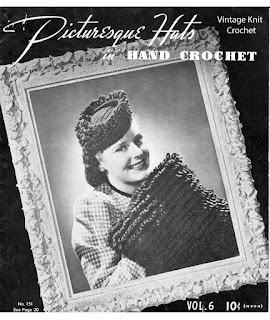 There was also a number of pattern books issued that featured several in each of the Angel Crepe Yarn.  This book, Picturesque Hats in Hand Crochet was published under the Bernhard Ulman name in 1939 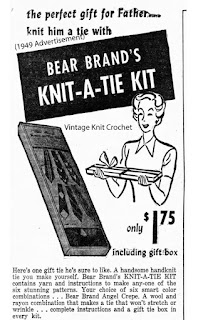 Both Bear Brands a Fleishers also went on a newspaper and magazine campaign for kits.  This advertisement for a 'Knit-a-Tie' kit, where you received the yarn and instructions for 'only $1.75'. 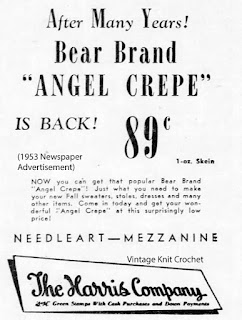 In 1953 came this advertising campaign announcing Angel Crepe is back!   Well, it had not been gone, but sales were obviously lacking.  Advertisements listing the price were were down also to the original introduction - at 50 cents for a 4-oz skein versus the 1-oz ball.   We were moving into the era of ready made quick fashions and the years of knitting one's own dress was declining.
And then, other than secondary markets, this yarn disappeared.   Now, I can't give you exact substitutes as I don't Knit (just research), but should you fall for one of the patterns calling for Angel Crepe, look at the specs given at the top of this post and make a selection to meet the gauge of your particular
pattern.
And so, you might ask, are there any patterns in the shop calling for Angel Crepe Yarn?   Well, of course there !

Oh - one last note for some Trivia.   Why didn't other yarn manufacturers also produce Angel Crepe Yarn?   Well, the answer is ... Bernhard Ulman Trademarked it!
Hope you enjoyed the post.   Thanks for dropping by,
Lorrie
Lorrie Vintage Knit Crochet Pattern Shop at 4:53 PM