One of my bigger issues is staying on task.   I'll be working along on this or that and then .... hours simply disappear.  For Example.  I've been scanning many of the old magazine advertisements and listing in one of my Facebook albums.   I'm not sure why, but do think they will be useful to someone ... besides just being public domain art.

This was the clip I selected, it is from the 1949 issue of McCalls Needlework.  I updated the clip in Photoshop and, started thinking all those things that get me sidetracked.   Like ...

Verla E was born November 27, 1904 somewhere in Minnesota.
She grew up and married Carl Upstill,  they had a daughter, Dolores, and lived together in Hennepeg and Des Moines, IA.

Verla loved crochet and, in 1946,  invented a device, which she called the EZ-Duz-It Crochet Frame. 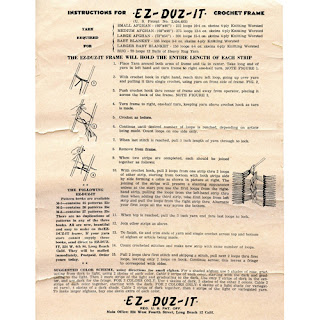 This is the official direction sheet.   It shows the location as Long Beach, which would lead me to think this is where she had it manufactured. 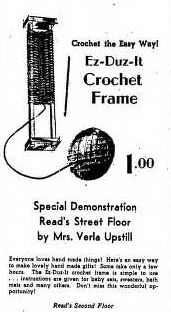 1947
She arranged manufacturer of the device and took up marketing it herself in shops in her, and neighboring states.   Her device was sold for $1.00.

In 1948, Verla applied and received a patent for her device. 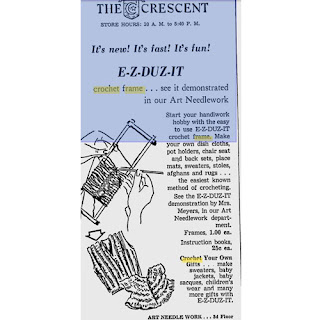 1952 - Advertisements continue in newspapers, but Verla is no longer the demonstrator.
Price is still $1.00 and instruction booklets are available for $0.25.   (Online I've only found reference to one volume) 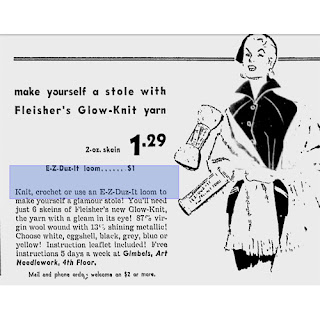 1953 - sometimes advertised in conjunction with Fleisher's Yarn.  The price is now $2.00

There continue to be a few advertising clips online in old newspapers up until 1958.  After that, I am unable to find any reference until a death notice in August of 1980 in Long Beach, CA.

There's an online manual at Needlework Books, which will give directions as well as a few patterns, if you happen to come across one of these tools.

And now, it's been three hours and I still haven't got the original advertisement I started with posted to Facebook!    But, I must say, I did learn a few things that I didn't know!

footnotes:
a) This blog post original published in shop talk blog in April 2013.
b)  Received the following (quite interesting) comment:  "Thank you for your research Lorrie, Verla was my aunt. Dolores is still alive, and I still have a bunch of these looms laying around. It is interesting to learn that people are still talking!
Much love, Robert III"