Next up in my stack of Mail Order Patterns to process is a crochet pattern branded as Mayfair Needle-Art Design.  I recalled I already had one Mayfair pattern, however, had not yet taken the time to learn more.  Well, now is the time!

The official name of the pattern line - Mayfair Needle-Art Design.   In the newspaper clippings they simply branded 'by Mayfair'.  They marketed a line of sewing, knitting and crochet patterns in 'The Tribune' franchise of newspapers across 17 states. The advertisement promotions appeared bi-weekly in the Womens Pages.   The ads first appeared in April 1936 and ran through October, 1937, then disappeared .... no more 'by Mayfair' tag lines.
There were approximately 140 marketed, all three digit numbers ranging between 120 and 350.  Now this number range implies there may have been more patterns.  If so, I've not found them!  There was also no sequence to how they appeared, one week 220, the next 135.
I've just two of these patterns .... 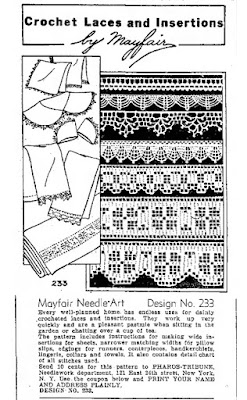 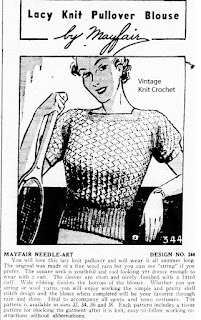 Design 344 - Knitted Blouse
This blouse an unusual factor - perhaps consistent with it's age.  It was ordered by size (32 to 38), and came with tissue patterns for blocking purposes.

I looked to see who preceded Mayfair Arts in the Tribune publications.   Well, for sewing patterns, it was Household Arts.  At that time, Household Arts did not market knit or crochet Designs. Perhaps, Mayfair was, for a short time period, a part of Household Arts.

And who followed Mayfair Needle Arts?  Household Arts, of course, under the name of Alice Brooks. 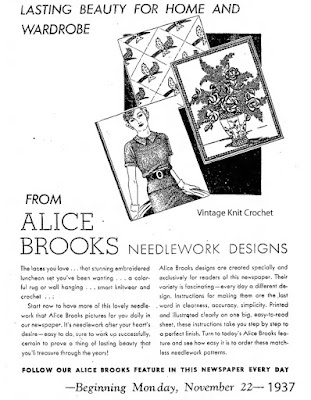 And, that's all I (currently) know about Mayfair.   Should you know more, or perhaps some of these patterns in your collection that you would be willing to share, I'd be most appreciative.   I'm trying to create a directory of mail order designs for that 'Bits of History' concept.

Thanks for dropping by,   Lorrie
Lorrie Vintage Knit Crochet Pattern Shop at 2:57 PM