American Thread Co., past and present, brought us many fine yarns for our creative pursuits.   One, being Dawn Knitting Worsted. 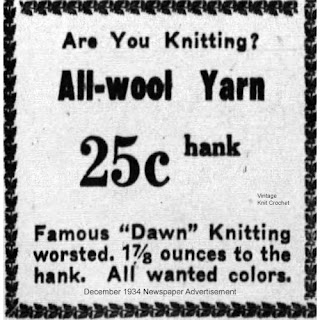 Dawn Knitting Worsted appeared in the market place in December of 1934.  Note here that 'Famous' is simple what you call it.   At introduction, the yarn certainly not yet Famous .... but, by the end, it just may have gained that status. 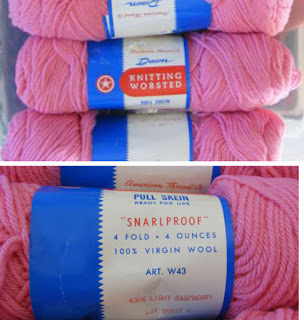 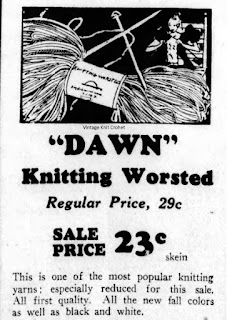 Another proclamation in this 1934 newspaper advertisement -- 'one of the most popular knitting yarns'.   At this stage, the yarn had been in the market less than 6 months.  These same advertisements appeared in newspapers across the country, obviously issued by American Thread to the individual 'selling stores'.  (I'd love to know if American Thread carried a portion of the advertising costs.)

This 1943 ad reads 'especially adapted .... for Men in the Service'.   During WWII, wool became a scarce commodity, making wool yarns hard to come by in the general market place.  It would be interesting to know if 'especially adapted' meant a temporary change to the fiber make-up of the Knitting Worsted. 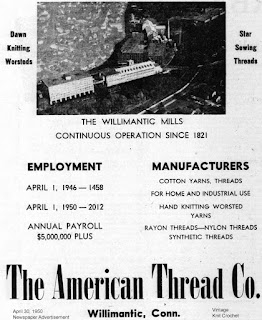 And, consistent with their name, American Thread, all the knitting worsted were produced in the USA at their Willimantic, CT plant. 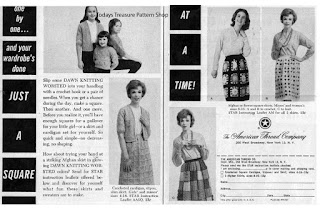 American Thread, as was typical, in had a fair number of promotions in the Needlecraft magazines.   This particular 1962 advertisement, in a subtle manner, brings home the point that the ever-popular afghan yarn is also a great option of garments. 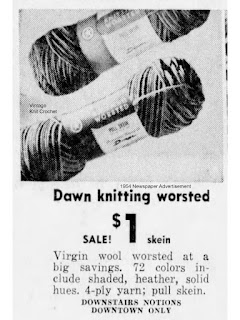 Through the 1960's promotions of Dawn Knitting Worsted remained strong.  Another (possible interesting) note about American Thread is they don't publish their name as part of there advertisements.   Most brands lead the way, their name first, followed by the type/brand of the yarn.   Do you suppose that American Thread knew that their brand speaks for itself? 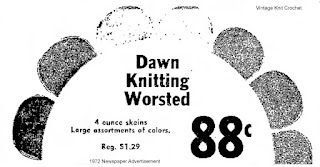 AND THEN, Spring of 1972, it was all over.   American Thread discontinued their Dawn Knitting Worsted, and (I assume) dedicated their equipment to another 'fabulous' yarn.

There were, at least, a  dozen American Thread pattern books and leaflets that featured Dawn Knitting Worsted.   They also published a fair number of patterns in magazines, such as McCalls Needlecraft and Modern Knitting.   There are, of course, quite a few of these patterns in my shop, should you be interested in browsing.   As for a substitute yarn, well, any 4-ply knitting worsted weight yarn should do the trick.

Thanks for dropping by.
Lorrie Vintage Knit Crochet at 2:12 PM