Style Smiles by Gretchen first appeared in Newspaper columns in the Northeast (United States) at the end of the year -- December, 1936. 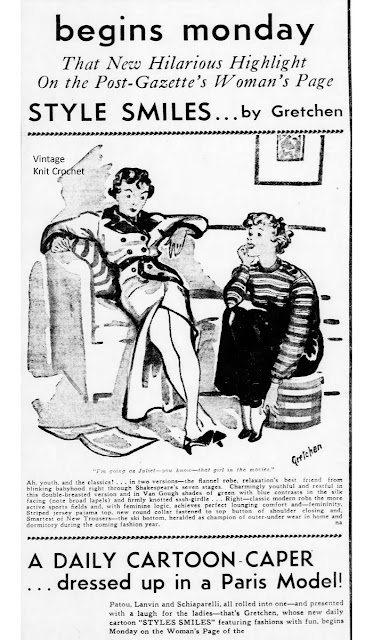 A Daily Cartoon--Caper .... dressed up in a Paris Model!
"Truly an amazing array of feminine fripperies mark with distinction this humorous highlight for the ladies.  Gorgeous creatures in gorgeous creations clown around for Gretchen, sensational humorist, remarkable artist and inspired creator of tomorrows styles!   This engrossing fun daily feature -- dressed up in a Paris model -- is but one of the brilliant features brought you daily in your Pittsburgh Post Gazette". 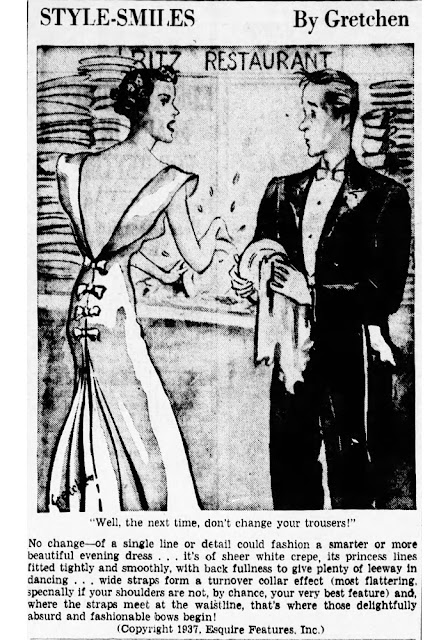 And then .. on January 1st, the syndicated column began. ( It's was the first column for Esquire Features, Inc. who later expanded with other cartoon related cartoons and then merged with another syndication a couple years later).

I came across Style Smiles while searching down a particular crochet phrase in the newspapers and was immediately enchanted.  So enchanted, in fact, that I'm not even sure where that original catch was, as I was then reading about Style Smiles.    This is exactly how I get sidetracked and, some days, get so little done!

It was the end of December, so I decided, for fun, I'd reprint the columns to coordinate with the date (day and month) of their original release.   The column appeared most days, however, I've found a couple gaps.   I've no way of knowing if these gaps represents date of no publication, or simply dates the newspaper did not get scanned into directories. 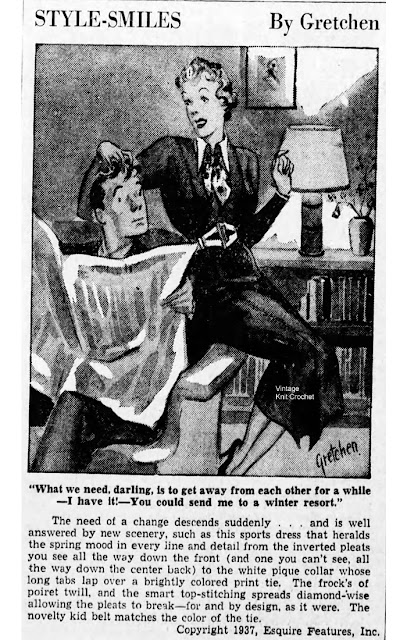 Each cartoon has an endearing caption with a generous description of the fashions of the day.

I'm posting the cartoons on my Facebook page and then filing into a Style Smiles by Gretchen Photo Album if you'd care to follow along.