I've not been able to find much on this American Thread yarn -- Star Spun -- however, I'll share here what I know and/or guess, since it a) existed and two, I have at several patterns calling for it in the shop. 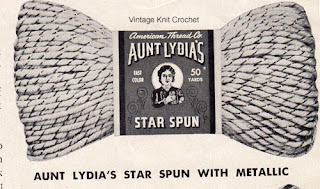 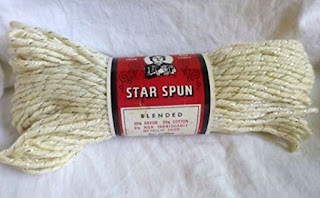 According to the label, Star Spun is a blended yarn, 69% Rayon, 23% cotton and 8% Metallic Thread. There were 60 yards per skein.

From appearance, I'm going to suggest that this is a variation of Aunt Lydia's Heavy Rug Yarn.   In 1955, when Star Rug Book No 134 was issued, the blend on Aunt Lydia's Heavy Rug Yarn was 75% Nylon and 25% Cotton, a 4-ply yarn.   The design variations where I've seen this yarn used in patterns is the contrast color and the bit of sparkle added by the metallic thread.

So, I would say that should you wish to make a design (probably rug) that calls for this product, that any heavy rug yarn that meets the gauge will work.   You might even be able to find one with the sparkle.
Lorrie Vintage Knit Crochet at 3:52 PM