Now, I know that a rug loom has nothing to do with Knit or Crochet, but I have a sweet pamphlet in my collection of papers that deserves to be shared.  AND, since it's my blog .... I can write whatever I want !

Now, the 'My Lady Rug Loom' was introduced to the market in 1938.  There were actually two - the Standard and a Junior model. 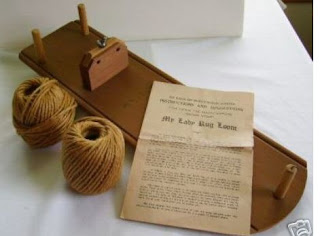 This is the Junior model (Photo from Worthpoint)

This is the Standard Model (Photo from Etsy Seller VintageandretroinWv) 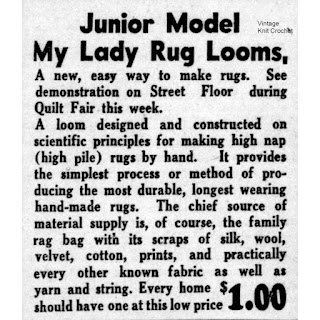 The company, My Lady Rug Loom Mfr. (Los Angeles) went on a marketing blitz across the country with a series of newspaper ads.   This ad is February, 1938. 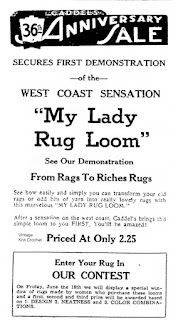 This demonstration takes the promotion a step further - a Rug contest in 1939.  I searched the Paris, TX newspaper for a follow-up on the winners (hoping for a picture of the rugs), but nothing was found.

And then, it was all over, with the last newspaper advertisement appearing early 1940.   Perhaps the rug loom did not prove popular, or more likely, World War began September 1, 1939 and labor and finances were no long available. 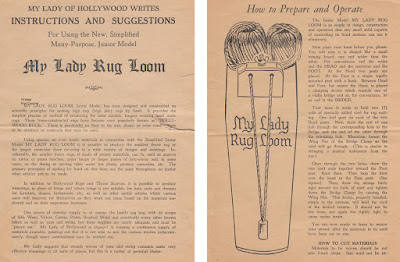 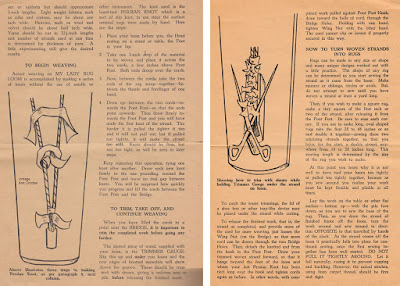 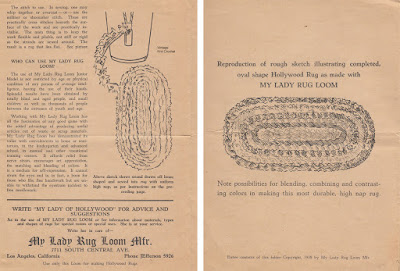 I've set up a Google alert hoping (one day) to learn more.   Old pictures of finished rugs would be more splendid.    Perhaps you know something about this old ' Bit of History ' and will share.

Thanks for dropping by,
Lorrie Vintage Knit Crochet at 8:53 AM