As we know, Martha Madison patterns were a Mail Order syndicated service that ran between 1956 and 1971 in newspapers columns across the country.   The format was basically the same.   The pattern offerings were in single column format with the picture at the top, followed by the pattern description and the mail-away directions on how to obtain the pattern.    In 1961, the Martha Madison syndicate (General Features Corp) began offering catalogs with a selection of their most popular patterns, which could be obtained for an additional charge.  The same format was followed across the country, with one exception ....

It appears the Daily Press joined the Martha Madison syndicate in March, 1963.  Instead of running the single column format, they ran a multi-column advertisement, offering a pattern selection. 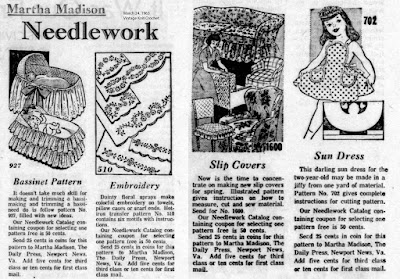 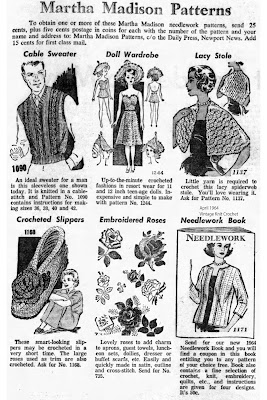 April 26, 1954 - the offering has expanded to 5 or more patterns.  In this particular ad we are also shown the cover of the Needlework mail-away catalog. 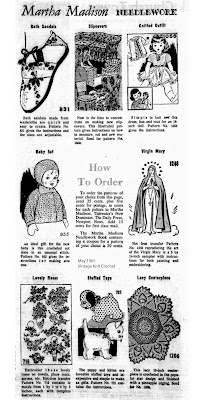 May 2, 1965 - The number of patterns being offered per ad continues to grow. 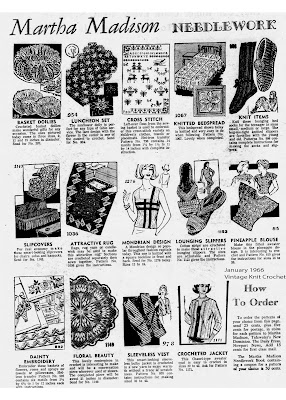 In August, 1966 the expanded ads stop.  Now, there were still the single column pattern offerings here and there, but not in the typical scale offered through other newspapers.  In 1972, the syndication closed and the ads, of course, stopped.

I've placed all the ads in one of my Facebook albums, should you care to browse.    There are also a number of Martha Madison patterns in the shop.

Why the upscaled ads at this one newspaper only?   I have absolutely no idea.  I wish I did as I've always been one of those 'wonder why' people.   Perhaps one of you know something more?

Thanks for dropping by.
Lorrie Vintage Knit Crochet at 1:54 PM