It happened back in 1942.   Junior Miss is a quite popular play on Broadway.   A comedy piece staring three young teenagers with frustrated parents learning to deal with them. 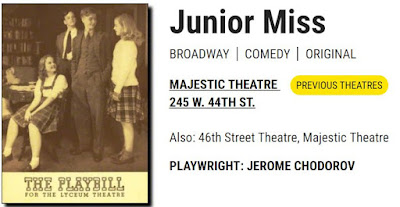 It was a quite popular play, a bit of whimsy in rather bleak WWII times, staring 16 year old Patricia Peardon.    But, what does this have to do with Laura Wheeler Design patterns?   Well . . . 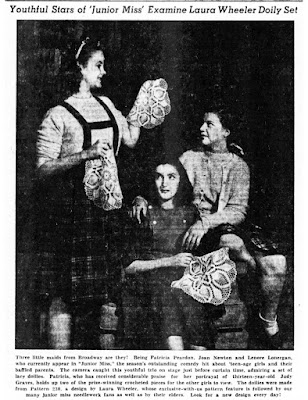 "Three little maids from Broadway they are!  Being Patricia Peardon, Joan Newton and Lenore Lonergan, who currently appear in Junior Miss, the seasons outstanding comedy hit about teenage girls and their baffled parents.  The camera caught this youthful trio on stage just before curtain time admiring a set of lacy doilies.  Patricia, who received considerable praise for her portrayal of 13 year old Judy Graves, hold up two of the prize winning pieces for the other girls to view.   The doilies were made from Pattern 230, a design by Laura Wheeler, whose exclusive with us pattern feature is followed by our many Junior Miss needlework fans as well as their elders.

And, that how Laura Wheeler made it to Broadway!

Oh ... and if you'd like just a bit more trivia .... the rumor has it the Junior Mints were also based on the Junior Miss series ... but in this case, the follow-up movie, not the play.

Okay, I'm back to work now.    Thanks for dropping by.
Lorrie Vintage Knit Crochet at 7:59 PM