The contest, which closes June 9, 1923, offers $11,000 in cash and prices, with the grand prize being $2000, and 149 others will receive cash prizes between $25. and $500.   The first, second and third prizes are national; the remaining prizes are awarded three per state.  Remember, this time span is in the middle of the great depression, when the potential of cash would be of great interest to 'knitters', as well as increased yarn sales to Fleishers.

The completed entries are sent to Fleishers office in Philadelphia. All of the garments that do not win prizes are returned to the knitter. 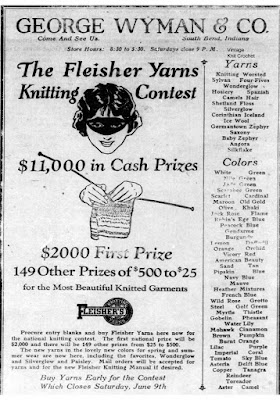 The official announcement(s) began appearing in newspapers across the country on April 07, 1923.   The ads were placed by the individual local yarn shops, where you could also purchase the yarn, pickup the entry form, and even purchase Fleishers new Knitting Manual.

AND ... American knitters got started - participating in a variety of ....... 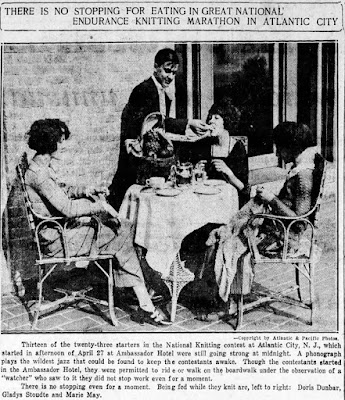 Obviously this promotions (by the hotel perhaps), featured 23 knitters, knitting non-stop at the Ambassador Hotel in Atlantic City.  They were closely monitored to make sure they did not stop. From another newspaper is a notation that the youngest of the 23 knitters was 3 year old Nancy McGurk, who fell asleep after 1 hour, knitting needles still in hand. 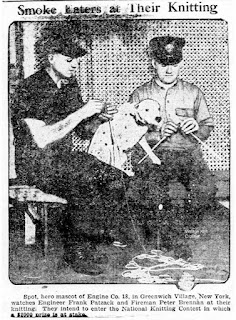 In New Jersey (notice the dog between) Fire fighters knit between calls. 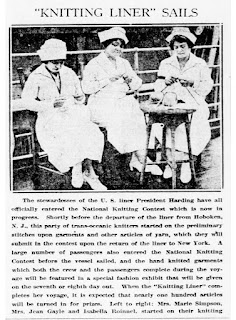 And here, the stewardesses of liner President Harding are knitting away.   There's an addition premise, and promotion going on here (and I'm sure many other instances).   The more times you enter, the higher your chances to win.   Passengers joined in on the contest and a 'week out' a special fashion show will take place to model the entries. 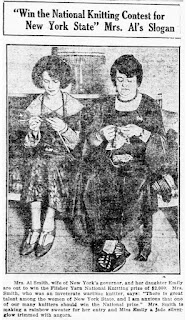 "Never before has a nation wide contest had such a dramatic appeal.  Prominent women, wives of governors, club women, the flapper who is now foresaking her flapperism, firemen and train conductors, wives of laborers, and women of wealth are all excited contestants".

And then ... June 9th arrives and at midnight, the contest closes.  And ... everything went quiet until early August.

"For the two weeks before the date of closing, and for days after, four huge trucks laden with knitted garments arrived each morning as the first delivery, and smaller lots continued throughout the day.  The entries disclose garments of rare beauty both in color and design, as well as others which are humorous and even grotesque". 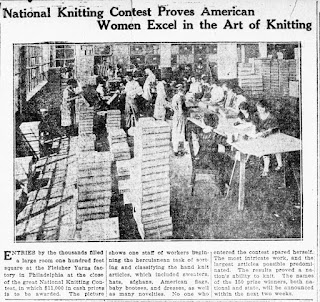 "Ten's of Thousands" of entries were received, which each had to be logged in, classified, stored, judged, etc. etc. etc.   Even Mrs. Calvin Coolidge entered the contest.  "Over 100 square feet of warehouse space was piled high with entries"  It took the staff weeks of work. 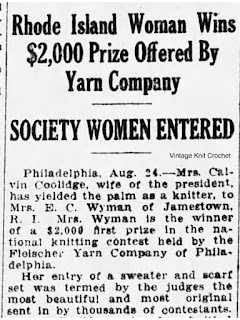 And, on August 24th, the process of announcing the winners began. Mrs Wyman of Rhode Island wins $2000, Mrs. Elizabeth Potts of California wins second place and Mr. G.F. Greenwood of Philadelphia wins place.   The remaining winners were announced in their respective states.

This particular contest was not repeated in subsequent years.

I hope you enjoyed this 'Bit of History'.    Thanks for dropping by.
Lorrie Vintage Knit Crochet at 3:21 PM

Email ThisBlogThis!Share to TwitterShare to FacebookShare to Pinterest
Labels: Fleishers