Kentucky brand yarns were produced by January & Wood Company in Maysville, KY.  Originally well known for their Carpet Warp brands, after WWII they began introducing other 'types' of yarn from the secondary market.    Among these brands .... Kentucky Soft Spun. 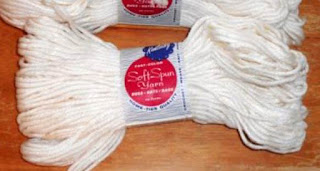 Photo from Ebay seller from Fourhuvsrider
A thick, fluffy yarn - soft and resilient.  Gives body to rugs  - a bulky, textured look and feel to jackets and stoles, hats and bags 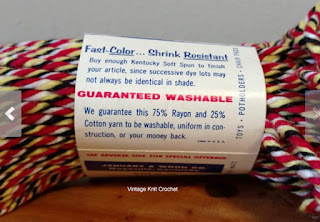 Photo from Etsy seller Feeling Groovy
A unique 'tweed' yarn.  Fours colors twisted together in a single strand create a varicolored effect that is uniform throughout the entire skein.  For unusual textures - with even the simplest stitches - in fashion and home accessories.   There was also a Soft Spun Decorative, which had metallic fibers to added pizzazz which was sold in 60 yard skeins. 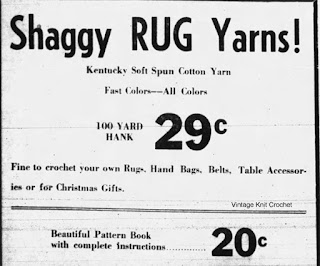 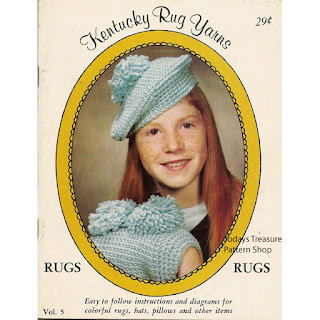 As noted in the above advertisement, they released a pattern book to promote their rug yarn - Kentucky Rug Yarns, Vol 5. 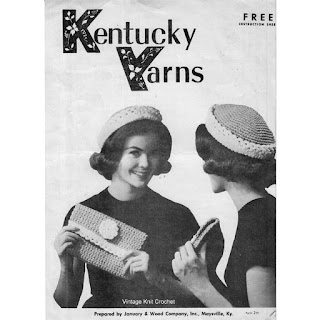 And, to catch up the customer with one more opportunity to try the yarn, a Free beginners pattern was given out with yarn purchases.  (This pattern is available in the shop).

To keep up interest in the yarn, as well as 'catch' new potential customers, January & Woods regularly ran newspapers ads for free patterns ... Just mail away to the Women's Editor of the paper.   I don't know if the patterns were distributed through the paper themselves, or the requests sent to January & Woods.  This 1954 offering combines crochet and sewing with cloth sleeves and collar.  There were many ... many ... many of these leaflets offered that I'd so like to find.   (Do you have any hiding away that we could perhaps trade for?) 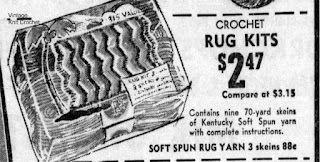 And, it late to the market (in comparison to other yarn manufacturers, January & Woods added the 'Rug Kit' to the product offerings in 1963. 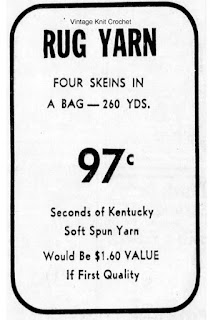 And, in the early 1970's, January & Woods began selling their 'factory seconds' of the Soft Spun Yarn.   Now, this may have been practiced by others .... I don't know .... but this is the first time I've seen reference to this.   The 'seconds were sold for skeins to a bag.

Now, there are a number of patterns out there in internet land (as well as a few in my shop, should you care to browse).  Many of the patterns are quite easy, perfect for beginners.    The yarn can still be found on Ebay in the misc. resale shops (Etsy, Artfire).   Or, for a substitute any of the current bulky rug yarns should do.

Thanks for dropping by,
Lorrie Vintage Knit Crochet at 7:45 PM