In the 1960's, Mohair yarns changed from being an available commodity to a 'must have' essential in the woman' wardrobe.  Now, I don't know if these was due to the many blends being developed, or a surge of the wool to the market, or fabulous promotions from the suppliers, but either way, it proved very popular.    Emile Bernat and Sons were among the leaders of the pack bring the 'blended' mohair to market.   They introduced Bernat Mohairspun Yarn in 1959, and quickly followed up with  Astrakhan,  Mohair Plus and Mohairlaine  in  early 1960. 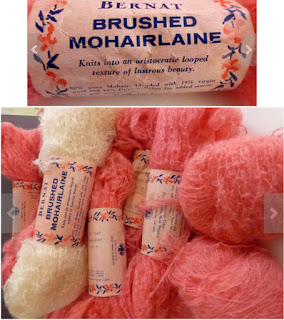 The first newspaper promotion takes us back to June, 1960.   It was also featured, through patterns, in the Bernat Mohair Collection Book 118. 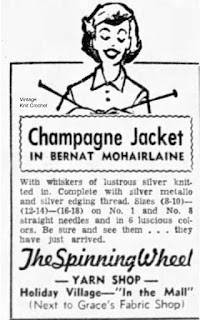 On a small scale (in comparison to Bernat's other mohair brands), patterns were supplied to the individual pattern shops to 'give away' with yarn purchases - August 1962.  (This pattern was also offered as a complete kit later in the year).

Bernat offered a number of Kit patterns in the early 1960's - this one from 1964.  The kits were made up in the Bernat factory, each in a variety of colors, and distributed to the individual yarn shops for sale to the needlework customer. 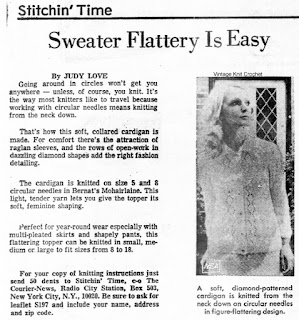 Bernat had teamed up with Judy Love, of Stitchin' Times newspaper column, where a Bernat Mohairlaine pattern was featured.   In these cases, the pattern was offered as a Mail Order through the newspaper itself.  This article / offer appeared in newspapers on June 30, 1970. 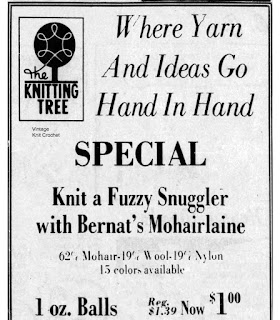 And the last newspaper promotion appeared in December, 1973 with this Fuzzy Snuggler offer.

And from there, it seems to have quietly disappeared from the market.  There did not appear to be a lot of product growth over the 13 years (1960 - 1973), with the suggested price starting at $0.99 and ending at $1.39.    Also, in the realm of Bernat, newspaper and magazine promotions were very light. I'm making a guess, that Mohairlaine was most frequently used in combination with the other Bernat Mohair yarns (as in a number of the patterns in the Bernat Mohair Collection Book and faded away in the same time frame as the other Bernat Mohair blends from the late 1950 / early 1960's.

Now, there are still a number of patterns out there that deserve consideration .... I have a couple in the shop as well, should you care to browse.  For a replacement, select a lightweight brushed mohair that will meet the stated gauge of your pattern.

Thanks for dropping by.
Lorrie Vintage Knit Crochet at 12:41 PM