In the late 1950's / early 1960's, Mohair yarns were becoming quite popular with knitters for it's versatile and soft possibilities.   A bit of romantic allure on a skein of yarn. 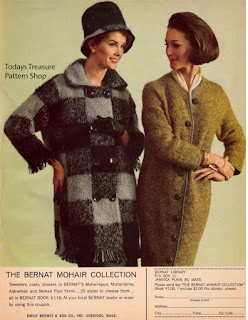 Bernat, being right in line with all  new market trends, introduced three Mohair yarns, the most successful being Mohairspun. 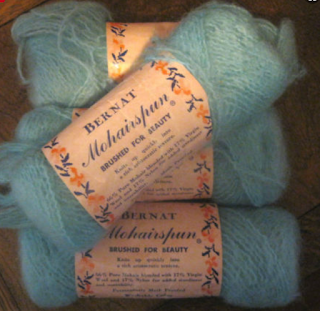 Bernat, being one of the major yarn suppliers, was no exception, entering their Mohairspun to the market at the end of 1960 for a mere $0.79 per 1 ounce skein, without material makeup appearing in most advertisements - 66% (goat) mohair, 17% wool and 17% nylon.  This is a worsted weight yarn; 9 wpi. 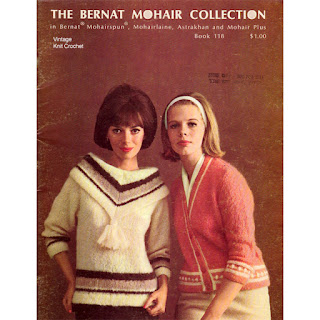 A couple pattern books were issued featuring the mohair line of yarns including The Mohair Collection  Book 118 one of the favorites.  Bernat also ran advertisements in needlework magazines, which also included several patterns (not featured in books) 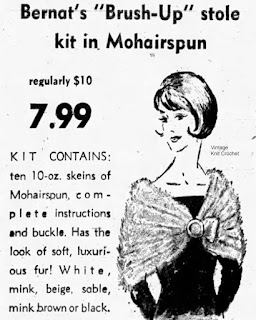 Another (quite profitable) promotion were kits that contained everything (except the needles) to create a specific item.  Bernat put the kits together, which were delivered to the retail outlets for sale to the consumer.   At times, the kits could also be mail ordered. 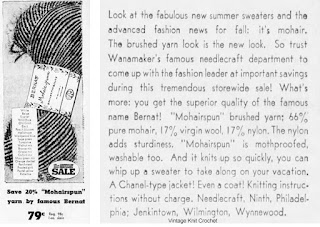 Retail yarn stores were supplied with Bernat patterns to give to customers 'free of charge', with the purchase of the yarn.

But, sooner or later, all good yarns come to an end, and in mid 1969, Bernat began the process of discontinuing their Mohairspun yarn.

There are a fair number of patterns calling for Bernat Mohairspun in the shop (should you care to browse), as well as out there in internet land that are well worth your time and expense.  It should not be difficult to find a replacement.   There are a number of current mohair yarns in the market; just match the gauge of your selected pattern.

Thanks for dropping by,
Lorrie Vintage Knit Crochet Pattern Shop at 8:04 AM