Well, today, while researching the first of these patterns for entry to the shop, I discovered how incorrect I was.

This pattern, is a quite nice crocheted jacket  with raglan sleeves, collar, patch pockets and contrast trim.   It is on the 'special side', in that it is sized for the larger woman - from 12-1/2 to 22-1/2.  Design 9079 is available in the shop, should you be interested.

I then headed over to Google-land, to search for the pattern description and received quite a surprise. 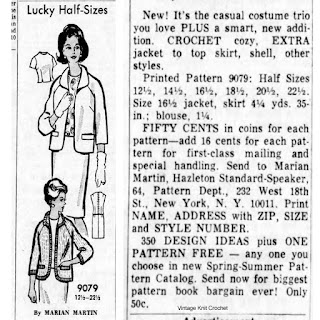 Design pattern 9079 was marketed as a Marian Martin Design.   Now, Marian Martin was part of the Readers Mail family, however, distributed sewing patterns .... all in the 9000 number series.  I pulled out the other two patterns to look for common factors.

Okay, it appears that crochet patterns were issued under the Marian Martin name when combined with a sewing pattern offer.   In this example, the offer is a sewing pattern for a woman's suit - jacket, shell and skirt, with an added bonus.   A crochet version of the jacket as well.   A combination pattern.  The other two were similar ... a dress and jacket, etc.   Another example of this is Marian Martin 9410 - a two piece dress and crochet shell stitch topper.

There's still a bit that I've not figured out however is how they came together.  All three hardcopy patterns I have are crochet only; with no reference to sewing.    Whereas the advertisement does not indicate the sewing and crochet pattern are separate items.

Yet another item to my 'I wonder' list about these mail order patterns.   Perhaps you know more about Marian Martin Crochet Patterns.