The Carol Curtis Needlework Corner was the creation of the Peerless Pattern Syndicate.  (Peerless Fashion Service, Inc).  This service, through the 30's and 40's, ran several other pattern columns with an emphasis on sewing patterns.  This advertising column, I'd assume, was their effort at gaining some of the popularity (and sales, of course), being enjoyed by the Readers Mail Syndicate which featured Laura Wheeler, Alice Brooks and Anne Cabot.

The 'by Carol Curtis' service began in 1951 to a very limited market - Northern California only and stopped in April 1952; later resuming. 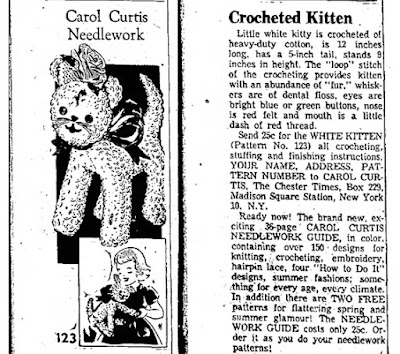 The pattern advertisement appeared in the paper, and the reader would send their 25 cent payment to purchase the pattern.   In this case, the address goes to a New York P.O. box.   The patterns themselves with oversized - 20 x 16 inches.  When charts were offered, this oversize made them easy to use. 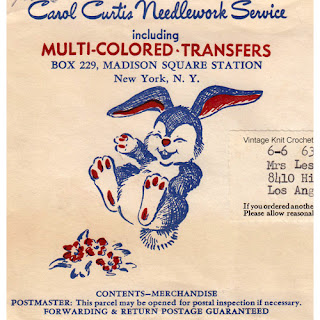 The pattern would be received, typically in two to four weeks, in a brightly colored envelope. 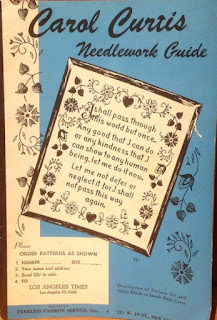 Within the first year, a catalog was issued which could be purchased for an additional 25 cents.  The 20 page catalog listed the 'more popular' of the Carol Curtis patterns.   Only one catalog was issued.  This catalog was the only 'customer' reference to the Peerless Fashion Service.

The Carol Curtis Needlework service ran the usual pattern offerings; sewing, embroidery, knit and crochet, along with a couple offerings of hairpin lace. 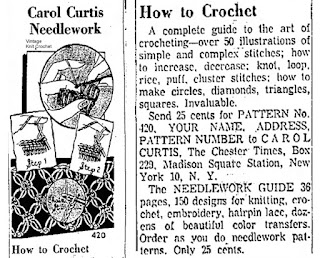 This was (to my knowledge), the only pattern service that also issued 'How-To' Guides for each of the arts their patterns covered. 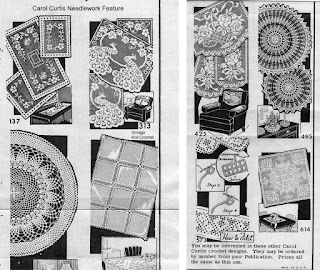 The Peerless syndicate took their advertising approach a step further than the other Mail Order Companies of the time.   A portion of each pattern page was a showing / offering of other current patterns in the same type.  A mini-catalog you might say.

The pattern service continued until January 1956, and then stopped without a word.  A search of knit and crochet patterns for the time period, 1951 through 1956 found  114 patterns released.  Far more of the patterns were crochet than knit.  The majority of the patterns were easy designs for potholders, mats, doilies.  There are a couple splendid filet crocheted patterns.   This was never a National syndicate; the ads appearing in less than 20 states.

There are a few of the patterns in the shop, should you care to browse, with a number more waiting to be processed.  Sometime, in the near future, I'll pull the advertising pictures and set-up a Facebook album.

If you know more about Carol Curtis, or are willing to share patterns that you might have, please let me know.   Thanks for dropping by.
Lorrie Vintage Knit Crochet at 9:11 PM