For this post, let's go all the way back to 1944, nearing the end of World War II.   Wool was still in scarce supply, however, some brands were beginning to re-introduce wool based yarns to market for uses 'other than' military knitting. 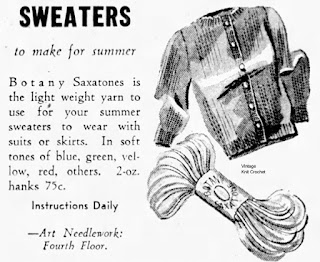 The first newspaper advertisement, interestingly enough, appeared in in Des Moines, IA.   There were several other ads that appeared during 1944 / 1945, but overall a very sparse product introduction.    (no doubt, due to the wool shortage)

In 1946, wool was again readily available for mainstream knitting and the re-introduction of Botany Saxatone commenced.   The yarn, in 2-oz skeins, sold for 70 cents (same the the 1944 price).    It is described as a Saxony type yarn (A fine grade of woolen yarn twisted somewhat harder and smoother than a Zephyr yarn). 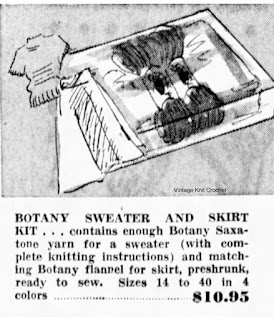 In 1947, Botany added kits to their line of products.   The kits were delivered to yarn shops for sell to the knitters.  The kit included "matching Botany flannel" for the skirt part of the kit.

Sales continued strong into the 1950's.   This 1954 advertisement "Ideal for stoles, socks, sweaters and sportswear".   The color line has been extended to 'over' 40 colors.

By the end of the 1950's, sales apparently began to decline.   Now, whether this was due to declining interest in the yarn, or Botany Brand emerging into the Fleishers/Bear Brand, I've not yet investigated.   But, in the early 1960's, the promotions stopped.

Thanks for dropping by,
Lorrie Vintage Knit Crochet at 4:22 PM

Email ThisBlogThis!Share to TwitterShare to FacebookShare to Pinterest
Labels: Botany