I spent a fair amount of (enjoyable) time researching 'bits of history' in Newspapers.com.   I just never know what's going to present itself ......  drumroll please ... like Laura Wheeler Designs in Australia ! 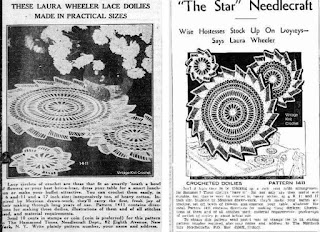 This advertisement set takes us back to (almost) the beginning ...  Laura Wheeler 1411 - Crocheted Doilies was offered in United States papers January 30, 1937, and in Australian papers August 22, 1938.  Did you notice the different spelling of Doilies ... Doyleys? 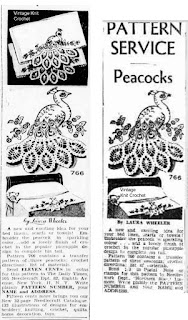 This beautiful Peacock - Laura Wheeler 766 - a combination of embroidery and crochet, was published in the US on January 20, 1944 and October 20, 1945 in Australia.  Here, the pattern descriptions and pictures are the same.  A note of interest, it does not appear the Needlework Catalogs were an offering. 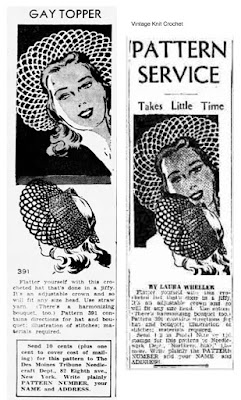 Here's another 'Gay Topper' example of almost the 'same advertisement' spaced about a year apart.  Laura Wheeler 391 is available in the shop.

Now, I found these in what's called The Trove - National Library of Australia, where a small accumulations (for historical significance, I'd assume), were clipped from newspapers.  The dates available were just a handful (142) between 1938 and 1947.    So, until I find another access to online Australian newspapers, I don't know if the offerings continued into the late 1970's, as did the Readers Mail Laura Wheeler syndication.

It was truly naive for me to  that Laura Wheeler was purely a United States pattern syndication.  (I've no doubt the syndicate appeared in Canada as well ... but haven't followed up on that yet).  Why wouldn't Readers Mail want to capitalize wherever might be possible.

There's a hint on The Trove page that the patterns were offered in New Zealand as well.  I wonder what other countries offered the Design Mail Order catalogs.   I know there are a number of International Readers ... perhaps you can let us know.

Thanks for dropping by.
Lorrie Vintage Knit Crochet at 8:28 AM