The year is 1936, Franklin Roosevelt is President, the Great Depression is nearing the end (1939), employment is up 16% and the country appreciated those 'little diversions' to get their minds off the troubles.   It was a great time for a 'National Contest" 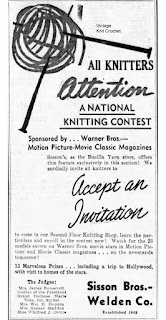 The advertisements began in newspapers in January 1936.  The sponsor of the event is the Warner Brothers - Motion Picture Movie Classic Magazine.  In the smaller print, you'll see the co-sponsor is Bucilla Yarn.   In later ads, this was expanded to include the co-brands of Fleisher's and Bear Brand.  The ads appeared in major metro areas across the United states, as well as the magazines. 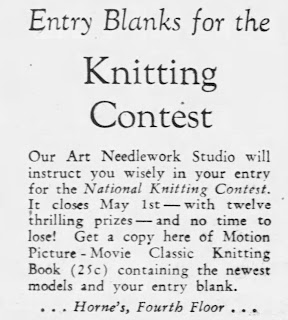 Contest details were slowly released ... building excitement and momentum.  This early February ad let's the potential participants know they had to buy a copy of Motion Picture - Move Classic Knitting Book for 25 cents.   (Unfortunately, I've not been able to locate a photo of the book)

(From other newspapers articles):

The excitement continues to mount in the various newspaper ads.  Realize the dream of a lifetime!  Knit (and wear) the smart fashions of Hollywood actresses.  The newspapers ads are published by the yarn shops selling the yarn, of course. 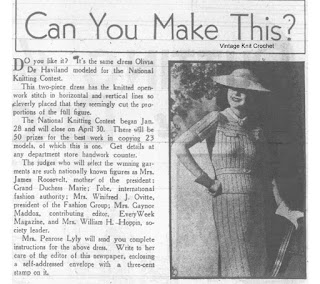 Various columns were published showing the possible outfits.   In this case, the knitter could obtain the pattern for free by mailing to publisher .... however, that was not entry to the contest.

Now, I've not seen much information on how the participants submitted their items for judging (perhaps one day), just they had to enter in advance and supply labels for the materials used.  The contest ended on April 30th, and the judging took place on May 1st in New York City.
Now, interestingly enough, I've not located a single newspaper that printed out the winners as a whole.  Perhaps this is because the individual shops paid for the advertisements, and they had no need to spend the money.   I did, however, find a couple articles in regional patterns about a couple winners.

First Prize:  Mrs. C.R. Goudie of Great Falls, MT.  All all expense trip for a week in Hollywood. 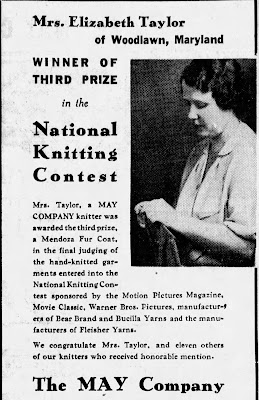 And that was that.   Bucilla/Fleishers no doubt experienced a large surge in shop orders, as well as an opportunity to introduce new yarns to the market.  The individual shops sold more than the norm in yarn.  The Movie Magazines experienced a large increase, albeit temporary, in sales, and who knows, perhaps gained a few new subscribers.

The contest promotion was not repeated in 1937.   I've placed a couple Google alerts and hope, one day, to be able to come back and post the pattern booklet.

Thanks for dropping by.
Lorrie Vintage Knit Crochet Pattern Shop at 3:24 PM