The syndicated Anne Cabot Needlework column was a part of the Readers Mail family, along with the other two well known mail order pattern names - Alice Brooks and Laura Wheeler.

Now, Anne Cabot Needlework Corner is a fictional name for the column, to give it a 'personal' feel.  So keep this in mind as you read the article.

Now, I don't usually do a 'mostly' in full quote of a newspaper article, but, in this case I'm making an exception.

Today a national expert who tells women folk how to use needle and thread, wool and cotton yarn, new fabrics and colored ribbons to make lovely things for themselves and their homes.  Anne Cabot found her first needlework corner at her grandmothers knee near an old base burner in a farm sitting room.  Before she was 10 she could weave a darn on a sock that was a work of needlecraft art.

This alert, widely traveled, friendly American woman, successful wife and mother, had judged National Needlecraft contests year after year and has visited county and state fair needlecraft exhibitions all over the country.  She has lectured between women' clubs, conducted University classes for  women, sought new designs and exciting color ideas among paintings in the great European art galleries, and has sat beside the famous lace makers of  Bruges and Belgium, learning their secrets.

She has taken tea and gossiped with crocheters in quaint continental towns, learning from them some of the crafts she now tells women about in her new and exciting daily column.

Mrs. Cabot was born in a small city near the Great Lakes, raised largely on her grandmothers farm and educated at a normal school.  After teaching at 19, in old fashioned country schools, she began to travel and study abroad and in the United States and ultimately became one of the outstanding judges of needlecraft.

Mrs. Cabot says the old fashioned custom of crocheting or stitching gave grace and repose to a woman' appearance as she sat by the sitting room lamp, and she has been happy to see the revival of that custom.  Invited everywhere because of her personal charm, and wide reputation, she usually takes along some piece of needlecraft.

In Mrs. Cabot you have a new friend, one who understands what you want in needlecraft and can tell you how to make it.  Look for 'Anne Cabot's Needlecraft Corner'  every day"    End Quote

Now, this just goes to prove, that just because you read it in the newspaper, doesn't mean it's true!

Oh, and before I go back to work, what was the very first Anne Cabot pattern advertised?   Well .... 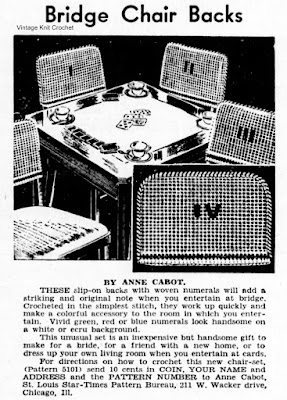 Thanks for dropping by,
Lorrie Vintage Knit Crochet at 6:19 PM