This afternoon, I decided to take a break and cover one of the vintage yarns.   Now, how do I decide which one?  Well, today I went to knitting page 27 in the shop and selected the first pattern.   And, what was the yarn?   You guessed it ... American Thread "Dawn" Bulky yarn. 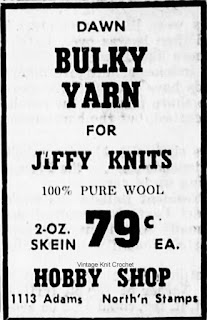 Dawn Bulky Yarn made it's appearance in yarn shops -- and newspaper advertisements -- in 1958, with an initial price of $0.79 per 2-oz skein. 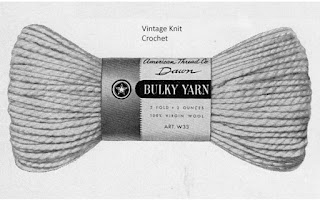 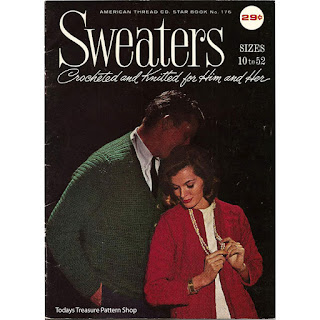 The yarn promotion was supported by release of American Thread Star Book 176 - Sweaters Crocheted and Knitted from Him and Her. 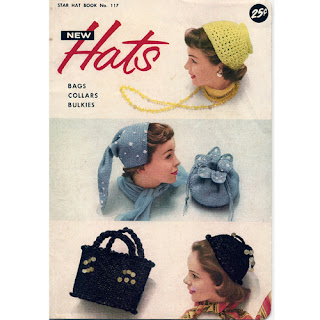 Another newspaper promotion that took place, in New York only, between 1959 and 1965 was a free mail order pattern offer.   It's interesting that there is no mention of the book the individual pattern was associated as an additional promotion.  I wonder ... if these were perhaps the same patterns given away at in Yarn shops with purchase. 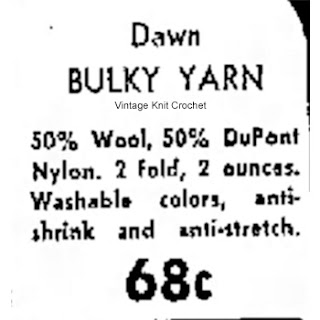 The last advertisement found was from 1965, still at 2 oz.   The price here is less that the introduction of  $0.79/skein.  It would be my guess that was  close-out price.   Also note the the makeup now says 50% wool, 50% Dupont Nylon.   I'm thinking this was an advertising mistake, as American Thread also had a Dawn Bulky Wool and Nylon yarn, which was a 50/50% blend.

So, there was not a lot learned about this yarn.   We know that it was in the 'super bulky' category that was available in the market between 1958 and 1965.   If you are looking for a substitute, you will need to rely on the stitch gauge for your desired pattern.    AND, there are quite a number of patterns available that called from this Bulky Yarn.    I have a variety in the shop as well, should you care to browse.

Thanks for dropping by.
Lorrie Vintage Knit Crochet at 4:13 PM