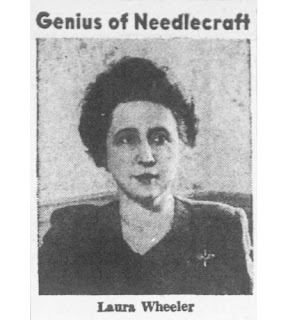 Anyone who has followed the Mail Order Pattern Syndicate will have heard that Laura Wheeler was a fictitious person created for marketing purposes. i.e., we'd be more prone to trust a 'real person' than  a 'mail-away' company.   But, does the article create any doubt?

The picture shown is part of the article and leads us to believe this is a real person.   The article tells us that Laura was previously an artist, turned business woman, hiring designers and being involved in the 'pattern business.  It ends telling us that 'after the war (August, 1945) she plans on expanding the patterns to Australia and Europe.  (These patterns were available in Australia in 1938).

So, in answer to the question -- No, this wouldn't lead me towards thinking Laura Wheeler was a 'real person.   But one interesting point remains and that is the writer of the article -- Helen Dudnick.

Typically, anything written (patterns and promotions) were syndicated across the country, with the same article appearing in dozens of newspapers.   But this article ... No.   the article was printed in one newspaper only - The News Leader, Staunton, VA.   And, the writer, Helen Dudnick, was not only NOT a feature columnist, but appears to have no other writing history.  A freelancer, perhaps?

And, now that I've shared this, I can get back to the investigation I was on before getting sidetracked with us.    And, as always, if you know anything further about Laura Wheeler or any of the pattern syndicates, I'd appreciate your sharing.

Thanks for dropping by,
Lorrie Vintage Knit Crochet at 4:20 PM