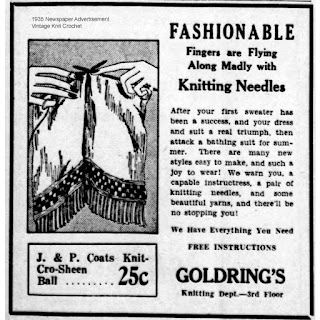 This newspaper clipping was among the first in newspapers and it's quite a delight.  "After your first sweater has been a success and your dress and suit a real triumph, then attack a bathing suit for summer.  There are many new styles easy to make and such a job to wear!  We warn you, a capable instructress, a pair of knitting needles and some beautiful yarns and there'll be no stopping you!. 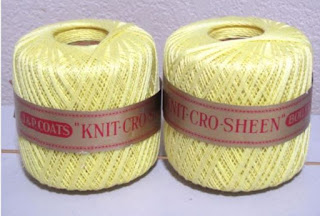 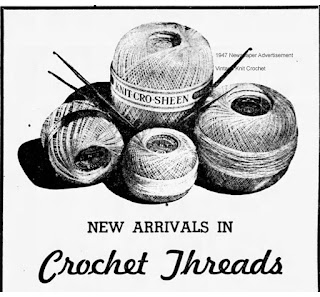 You just might recall this 1947 phto ... it appeared in magazine ads as well as newspapers.   The thread continues in it's popularity and has increased a mere 6 pennies to 30 cents. 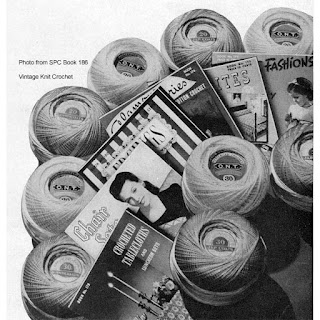 During the 1940's and 1950's, Spool Cotton (The Coats & Clark Distribution Branch) issued a number of pattern books that featured Knit-Cro-Sheen, as well as their other Mercerized Crochet Cottons.

Spool Cotton also promoted their threads by listing patterns in newspapers in the form of newspaper columns.   In the case of this mats pattern, the offering actually comes from National Needlecraft Bureau in The Needlecraft Corner section of your local newspaper. 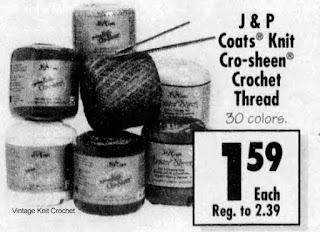 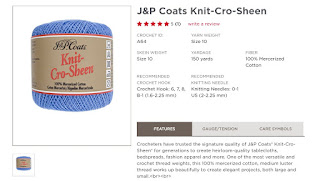 But wait .... if you go to the Coats Red Heart site, you'll see they have a place holder for the product.  But, alas, there is no link to purchase.

So, if you have a pattern that calls for Knit Cro Sheen, select a size 10 Mererized Crochet Cotton, 4-ply.   If you are looking for vintage patterns that call for this thread, I have quite a few in the shop.

Thanks for dropping by,
Lorrie Vintage Knit Crochet at 7:43 PM