In September, 1953, Coats and Clark's introduced their Speed-Cro-Sheen thread to the market.   This thread, a follow-up to their Knit-Cro-Sheen was a heavier weight and designed for crochet 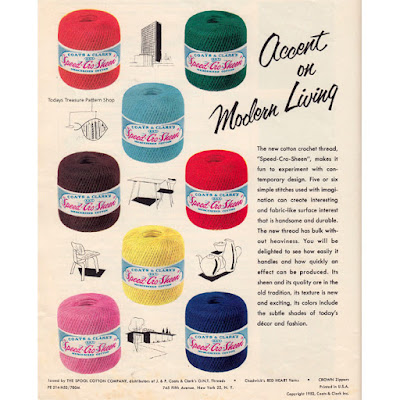 "The new cotton crochet spread, Speed-Cro-Sheen, makes it fun to experiment with contemporary design"   In addition to the standard white and ecru (that was typical for the time period) this thread was available in an array of bright colors, as well as multi-colored. 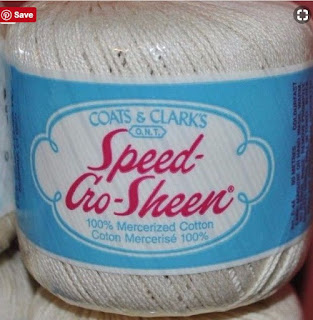 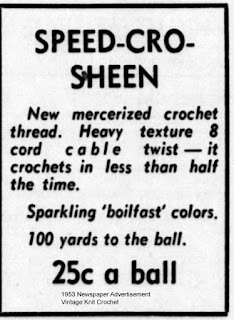 Speed-Cro-Sheen was frequently advertised in newspapers -- the typical sales promotions.  This ad was from the 1953 introduction of the thread.   It entered the market with a selling price of 25 cents. 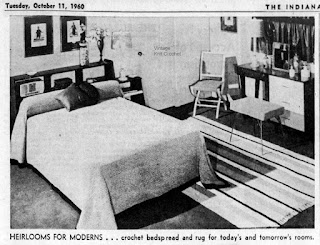 Full scale advertisements, in the form of newspaper articles (as in this 1960 example) also appeared, most likely coordinated and paid for by The Spool Cotton branch.  "The instructions leaflet for rug and bedspread also includes instructions for crocheting a vanity cushion bench cover.  For the leaflet, send a stamped SASE ....."   The Mail Order Pattern Number - PC-9117. 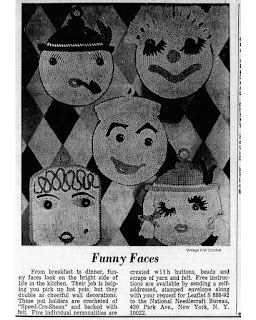 Here's another (1968) Speed-Cro-Sheen newspaper promotion.   In this case, the offering is being made by The National Needlecraft Bureau.   (I've not figured out the relationship between Spool Cotton and NNB.  Whether NNB paid a fee to use the patterns, or if the organizations were tied together.   Give me time!).

Speed-Cro-Sheen even made it's appearance in a number of Anne Cabot's Mail Order patterns.  (Typically, mail order designs did not specify any specific brand).  This pattern set, 5791 and 5901 are from 1982. 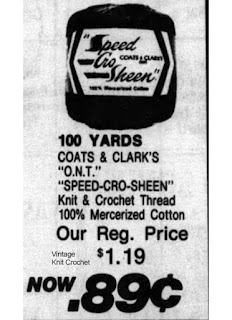 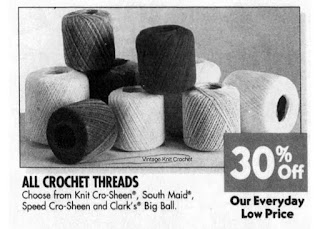 Advertisements and promotions began to decline in the late 1980's and completely disappeared in 1994.  Coats & Clark's Speed-Cro-Sheen enjoyed a 41 year life span ... And, that's pretty good.

There are a fair number of patterns in the shop that call for Speed Cro Sheen, should you be interested in browsing.

Thanks for dropping by.
Lorrie Vintage Knit Crochet at 3:27 PM