During the 1950's American Thread was one of the larger advertisers in Needlecraft related magazines.     Within an individual magazine, there would be advertisements for the latest pattern book release, as well as a number of American Thread Patterns.   Interestingly enough, the patterns in the magazine were not the same patterns are in the booklets. 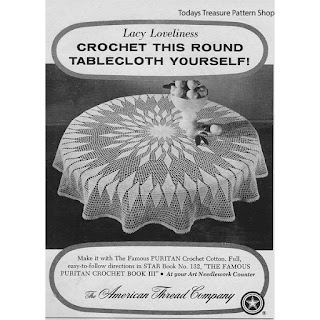 This Puritan Star Book No 132 was released as a promotion to their then 'new' line of Famous Puritan Crochet Cotton. 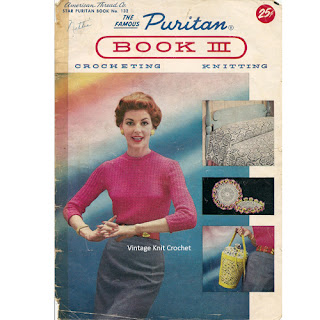 The lovely tablecloth gracing the ad was one of the highlights of this particular pattern book -- called The Big Round Puritan Tablecloth (available in the shop).
If I come across additional advertisements for this pattern booklet, I'll be sure to update this post.
Thanks for dropping by,
Lorrie Vintage Knit Crochet at 8:06 AM