So, I'm processing this pattern for the shop this afternoon .... an attractive 1944 design with a jaunty flair ...

named "Hat with Shell Stitch Brim".    The official description:   The hat with the shell-stritch brim that can be turned this way and that because it's made of soft Feltella and makes a smart suit-your-face style.  Goes anywhere.

What was that material?   Feltella?  Never heard of it!   So, off to Google -- Nothing; Off to Ebay -- nothing.  Seriously; nothing.  So, off to the island of last resort .... Newspapers.com.

Now, remember that this was 1944; War Time.  The majority of 'usual' knit crochet materials were being used exclusively for the soldiers.  This meant, to stay in business, the yarn manufacturers had to get creative, and the general population had to 'make do'.

I found a number of advertisements for the Feltella, however, not a single one identified a manufacturer. 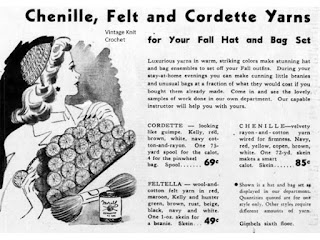 So, we now know that Feltella was a wool and cotton yarn, but I still didn't feel I'd arrived at an answer.   So digging a little further ....

So, to recap, it appears that Feltella made it's appearance in late 1943.   WWII ended in mid 1945 and, over the next few months, the previous yarn selections again became available.   Feltella disappeared from the market in mid 1946.

It's a fun hat pattern.   Should you decide to create one for yourself, I'd suggest a heavy rug yarn, or perhaps splurge and go with a heavy felted yarn ... whatever will meet the 3 sc - 1 Inch requirement.

Okay, on to the next pattern.    Thanks for dropping by.