Woolfoam Detergent for Your Handknits

In addition to Lux, there was another player in the 1940's detergent field ... The Woolfoam Corp.  (Associated with The Wool Novely Co., and Oakhurst Medicine).     I first noticed them in the Winter 1944-45 issue of Modern Knitting. 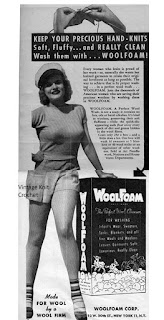 WOOLFOAM  -  The perfect Wool Cleaner for washing for Infants Wear, Sweaters, Socks, Blankets and all fine Wools and Woolens.

A short visit through Newspapers.com showed they started advertising in newspapers mid 1944. 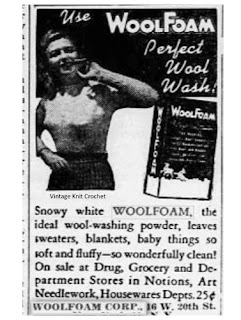 This ad appeared in about a dozen markets across the United States in 1944 as well. 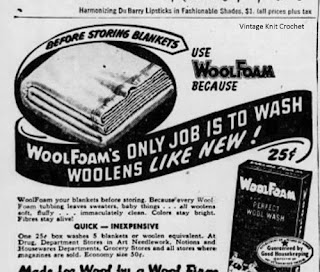 And was updated with several other ads through the end of the 1940's.   This advertisement was in the market mid 1945.

The ads started fading out in 1947, but remained sporadic all the way into 1957.   And then ... Gone.  Now, it appears the company, which was a division of Wool Novelty Co., is still out there, but it doesn't appear soap is in their line-up.

I'm sure I'll find more tid-bits as I work through my magazine inventory and will update this post should anything interesting appear.
Thanks for dropping by,