Reynolds Danskyarn, a Danish import, was brought to the market in early 1964.   It was an additional 'bulky' yarn for the Reynolds collection. 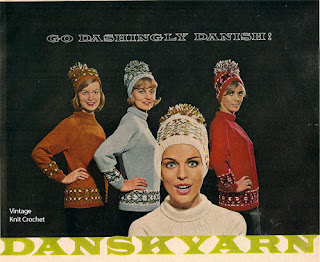 As is apparent in this promotion, the yarn was aimed towards the sweater and hat market and came in a wide variety of colors.  (Unfortunately, when I scanned this, I did not capture the bottom of the page, however did find over on an Ebay Page).   When I have this magazine out again, I'll update my photo). 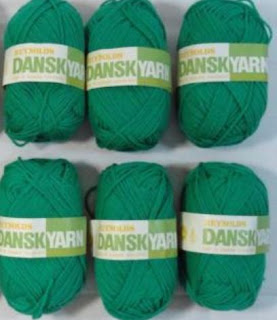 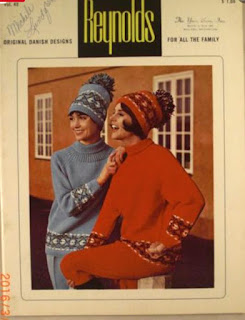 (Photo from Ebay seller teamster6horse)
Sporty Designs for the entire family are in Reynolds Volume 42, only $1.00 at needlework counters and yarn shops.  The pattern was issued as the primary promotion for Danskyarn.   The yarn did make an appearance in a number of other Reynolds pattern books as well. 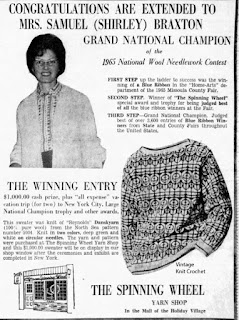 The yarn had a moment of fame when a sweater knit in the yarn was awarded first place in the 1965 National Wool Needlework Contest.   The true fame, of course, went to Shirley Braxton.

The product remained active in the market until 1974 and then was discontinued.    Now, I have no doubt I'll find more about Danskyarn (there are quite a few magazines awaiting review), and when I do, I'll come back and update this post.   And, there are a couple patterns in the shop, should you want to look.