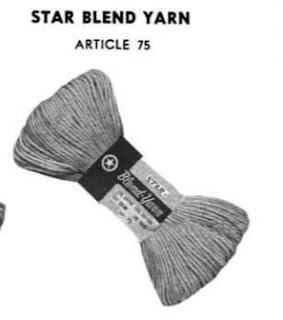 American Thread issued a couple patterns book that featured this yarn into 1954.  It was periodically cross-referenced with Aunt Lydia's Heavy Rug Yarn (same composition) as a substitute for each other.  (Which would be my recommendation for these old patterns).    Now, why American Thread would want to have two yarns that compete with each other .... I have no idea.

The yarn never gained great popularity and fizzled out well before 1961 ... according to this salvage sale notice.

There are a couple patterns in the shop that call for the Star Blend yarn.   I would recommend you substitute a heavy rug yarn, in brand of your choice.