Taking us back to 1953, Lily Mills entered their Double Quick Mercerized Crochet Cotton to the market.   This thread, most likely, was a follow-up to the heavier straw textured threads of the WWII era popular for hats, bags, mats, etc. 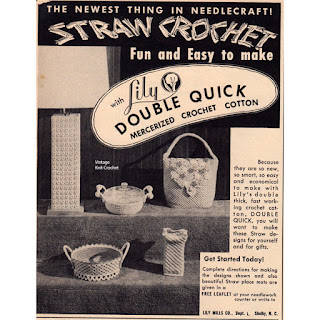 The Double Quick Crochet Cotton is a 8-ply cord, cable twist thread.  This advertisement promotion was issued in the 1953-54 issue of McCalls Needlecraft. 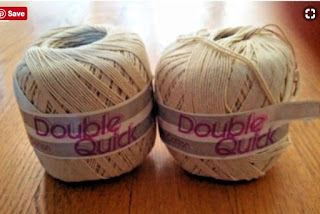 It was sold in both rolls (as pictured from ebay seller Newthings61) and in skeins. 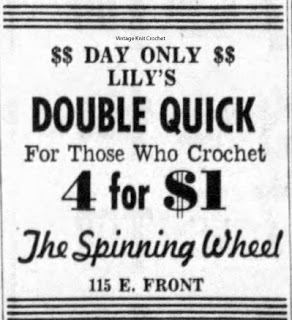 The price started at 29 cents but never went up much. 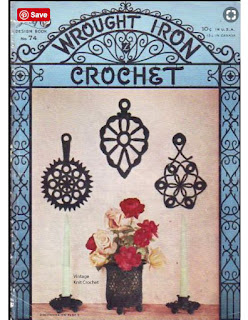 There were the typical promotions for the product.   Lily Mills supplied pattern pamphlets to the retailers to be given with the thread purchase, and Lily Design Book 74 - Wrought Iron Crochet was released.

The thread was apparently NOT a huge success in that it only made a four year market run, exiting in early 1958.    I've just two (at this time) patterns calling for Lily Double Quick.

And, that's all I know.    Thanks for dropping by,
Lorrie
Lorrie Vintage Knit Crochet at 4:51 PM