In my reserve of magazine advertisements is this vivid full-color display from a 1950 issue of McCall Needlecraft magazine. 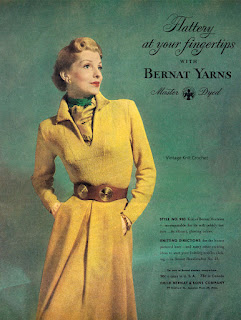 Here we have a promotion of Bernat's Merlaine Yarn, as well as Bernat Handicrafter No 23 pattern book, that featured the yarn.

A gander at Newspapers.com shows the Merlaine Yarn was introduced to the market in late 1949. - this advertisement from December. 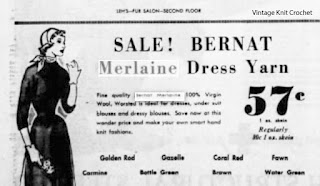 And the final ad appeared in mid 1951.  Here, the yarn is specifically billed for dress making, and due to it's short life span, I'd suggest it was not that popular.

According to Ravelry (the knowers of most everything knit and crochet) this was a 100% wool yarn. 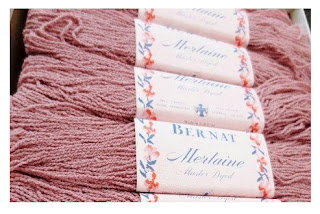 (Photo clip from Pinterest)
According to Ravelry (the knowers of most everything knit and crochet) this was a 100% wool yarn.
I'm surprised I do not (yet) have any patterns calling for this yarn.  Typically, when an advertisement appears in the magazine, there are several patterns that correspond.

I did find a couple references out there in Internet Land, such as this lovely three piece dress combination over at the Cosedilia site.    (If you need gauge information, it's referenced). 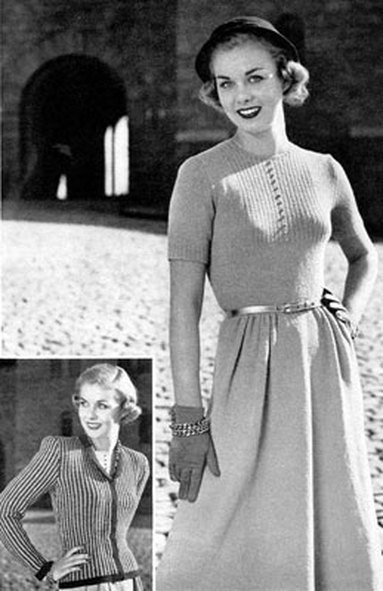 I'll keep my eyes open; it's highly possible there are more ads out there.    If anyone happens to have any of this vintage Merlaine Yarn in their stash, I'd love to have a picture of the label ... for the rest of the yarn details ...  hint, hint, hint.

Thanks for dropping by.
Lorrie
Lorrie Vintage Knit Crochet at 7:27 PM