A New Yarn Sensation .. It's bigger, bulkier, and you can knit it faster on giant size No. 15 needles.   Big Spice is 100% Virgin Wool, soft, color radiant, and resilient. 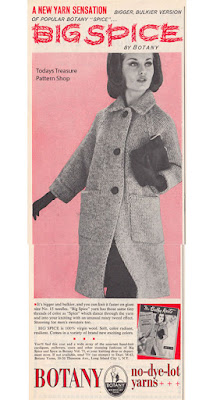 So, says this 1964 magazine advertisement that was published in Modern Knitting Magazine. 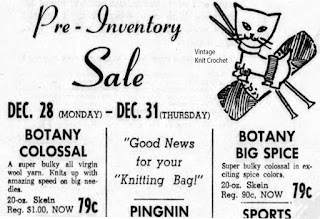 This advertisement comes to us from the 12/26/1964 Wausau Herald Newspaper (Wausau, WI).   A couple points .... First,  I like the concept of this sale ... Pre-Inventory!   Just what is that supposed to mean?  (Before the inventory arrives, or?).    Secondly, this ad shows us that you'd want to purchase Botany Big Spice when the Botany Colossal just isn't bulky enough.

The yarn makes perfect sense for this time period.   The early 1960's were popping with a number of 'Big Needle Patterns', mostly knit, but some crochet as well. 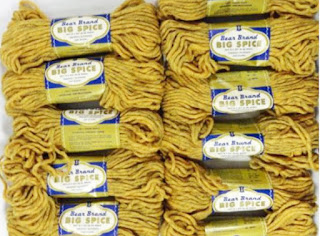 And, here's what the Big Spice Yarn looks like.   (compliments of Ebay seller gretel3042)
Note that the label is Bear Brand, not Botany.  Well, as you probably know, Bernhard Ulmann was the manufacturer/marketer here of both brands (Fleishers as well), and frequently branded the same yarn under the different names.   One point of interest is, by doing so, they were competing with themselves.  But, on the reverse side, if a fiber artist had an allegiance to a particular brand, they got the sale. 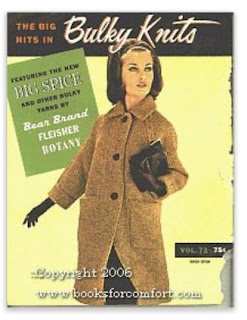 And here's a picture of the ad we started this article with ... The Big Hits in Bulky Knits (from Amazon seller) ... was issued in 1963.   Notice here, again, all three yarn brands are referenced.

Apparently the book was not a big seller for the times as there are very references to it out there in Google-land.   I'm also assuming the yarn was not a big hit either, as it lasted in the market only three years before being discontinued.

I do not have (yet), any patterns in the shop calling for this yarn, but there are a fair number of big needle designs that would be suitable should you have some of this in your stash.

Okay, time to get back to work.    Thanks for dropping by,
Lorrie


Lorrie Vintage Knit Crochet at 9:17 AM