I came across the name Ursula du-bois in a 1966 issue of The Toledo Blade, and, picking up a new name, was driven to investigate further.   (I love going through these old newspapers and can spend hours at a time. Thus the reason I get so little done, some days). 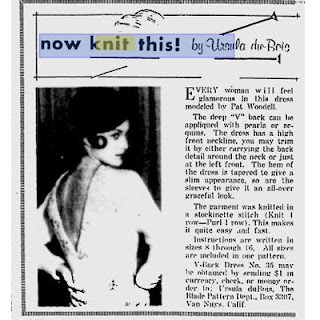 A number of knitting patterns were issued under the Ursula duBois name between 1964 and 1969.  Interestingly enough, these patterns were 15 - 75 cents higher in price than the norm for this time period.  Frequently, the pictures were low quality, making it difficult to see the merits of the garments.   Many of them, however, were modeled by actresses; in this case, Pat Woodell.    To a smaller extent, the patterns were syndicated across various newspapers.   I've found evidence of 5. 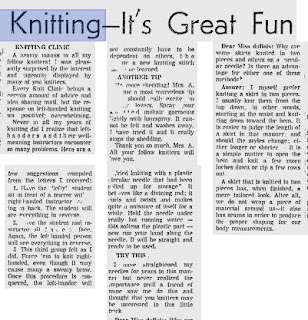 In addition to the patterns, several columns, in different cities, were written under the Ursula duBois name, and typically appeared along side, or underneath the pattern advertisement.  These columns were 'Let's Knit', 'Now Knit This', and Knit Clinic.  Both columns gave suggestions and advice, as well as answered readers questions.

There is two hints out there that Ursula duBois may have been an actual person, not a syndication name.  The first hint is that her name was updated to Ursula deBois Lewis in mid 1968, implying a marriage.  The second is business license was obtained under the name (whereas we do not see this with syndicated names). 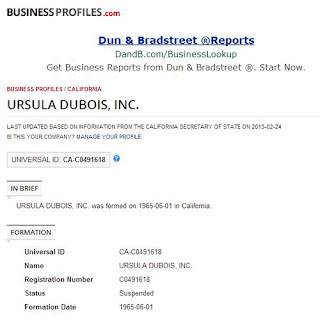 And that's it.   I was not able to find nothing else.   Which, if Ursula duBois was an actual person, I would expect to find tracks like birth or death certificates, events, designer references.   But nope.   Nothing.  I did set up a couple Google alerts on her name/address and if something should pop up, I'll fill you in.

In the meantime, I copied off all the patterns/columns I found and my putting them out here and there in my daily stream over at Facebook.   They are set up in their own Album - Ursula duBois, should you like to take a look.

Thanks for dropping by,
Lorrie
Lorrie Vintage Knit Crochet at 4:27 PM