Tucked inside a 1965 issue of McCall's Needlecraft magazine is this sweet advertisement for Bernat
Blarneyspun. 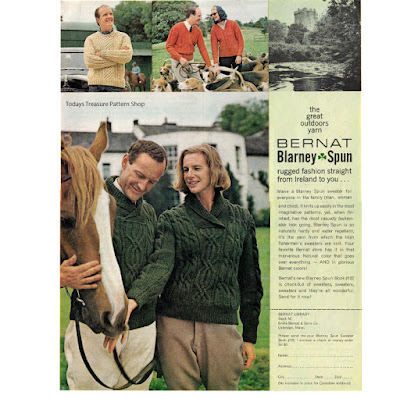 Bernat introduced the Blarneyspun yarn in the U.S. market in November 1964.   It is an import directly from Ireland.  It remained an active Bernat yarn until the mid-1980's. 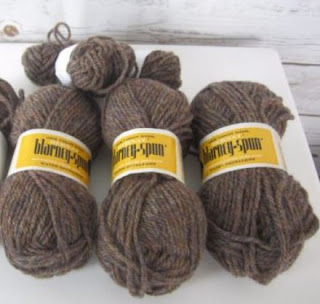 It is an Aran weight yarn, 100% wool, which is detailed quite well over at Ravelry.  As the name (Blarney) might suggest, it was designed for those marvelous Irish Knit Sweaters often called Fisherman.   The yarn was also used in many big needle knitted designs.   See reference chart below for possible yarn substitutions. 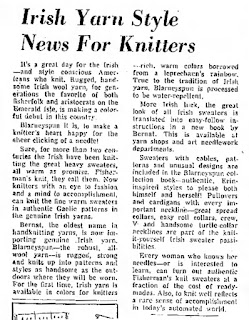 My favorite part .... "Blarneyspun it is, to make a knitters heart happy for the sheer clicking of the needles" 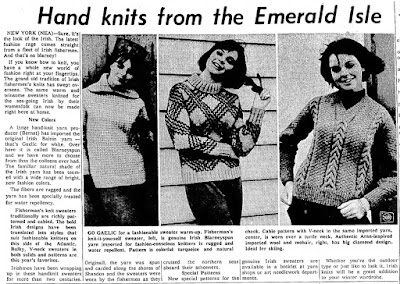 This January 1965 newspaper article gives just a bit more history to 'Irish Knits'.   I always enjoy this type of article.  Written up to look like a regular newspaper feature, but oh-so-clearly a Bernat sponsored (and probably paid for) Bernat paid promotion. 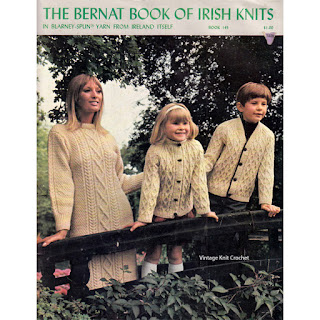 Bernat issued their pattern book No 145, Blarneyspun Collection to promote the yarn.  It has a delightful selection of  ... you guessed it ... Irish Knit sweaters.   A number of patterns from this book, as well as a few others, are available in the shop. 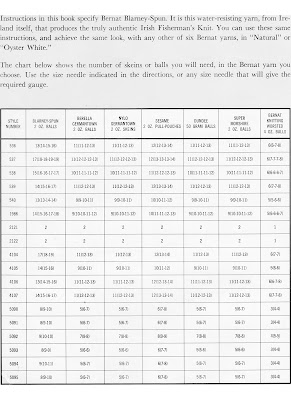 Bernat placed this yarn comparison (substitution) guide on the back page of the No 145 Collections book.

Should I come across more 'Bernat Blarneyspun' magazine advertisements, I'll come back and post them in this post.