I've come across a number of patterns of the last few months that call for Reynolds Jumbo Jet Knitting Needles or Reynolds Junior Jumbo Jet Needles  These are apparently H U G E (as in extremely large) needles that produce a stitch so large that you can literally knit an entire dress or sweater in the matter of a couple hours.   Since I knew that sooner or later someone was going to ask me "WHAT SIZE ARE JUMBO JET NEEDLES?, I thought I'd be proactive and have an answer ready.

I started the search in the newspapers ... 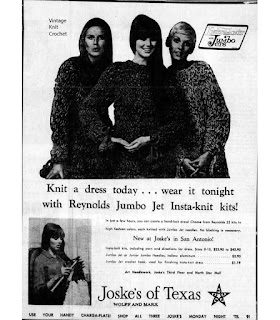 The concept for these needles were the brainchild of designer Jeanne Damon, who, as they story goes, experimented with whittled down broomsticks.  Ultimately, Reynolds Yarn Co. manufactured a lightweight aluminum version and Jumbo Jets became a 1960's rage. 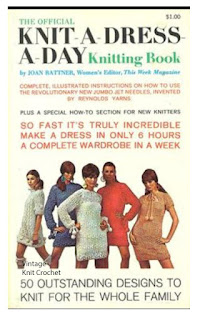 Jeanne Damon went forward and designed a number of patterns for the Jumbo Jet's, which were published in "The official Knit-A-Dress-A-Day Knitting Book.  In addition to dresses, the book also contained a number of designs for children and men as well.   A number of these patterns are listed in the shop.

The advertising for the product, as well as the patterns were a bit out of the norm.  The advertisements were written as newspaper articles, typically including a promotion for an individual pattern within the book and a retelling of the Jumbo Jets story.  This continued between late 1966 and 1968.  Then, the scene went quite.

I've not (yet) researched Reynolds Yarn Co. (as to whether they actually had a mill, or were a rebrander), but they went out of business and  their copyrights expired in the late 1970's, which brought on a whole 'other' line of Big Needles from other suppliers.

Oh ... to go back to where I started:  The needles came in two sizes, and there was a jumbo crochet hook as well -- for finishing the edges of your garments. 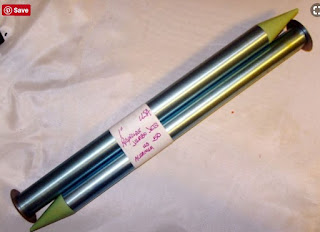 Reynolds billed them as:  "The worlds widest needle have a 1 inch span and are fueled by up to six skeins of yarn".    Both Susan Bates and Lion make needles in this size.  I'd imagine there are a number of others as well.

Here's a fun read with tidbits of history, should you have a few minutes to read.

Hope you enjoyed the snapshot of history.
Thanks for dropping by.
Lorrie
Lorrie Vintage Knit Crochet at 8:28 AM