Those of us old enough to remember the 1960's may recall that Bangle Beads were quite a hit in the needlework arena -- particularly crocheted hats. 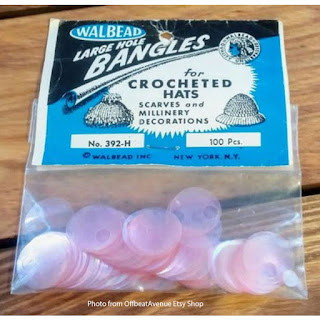 Introduced to the market by Walco Bead Co and marketed under the Walbead logo. 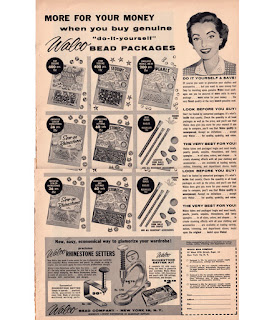 The concept for bangle beads, of course, was there all along in the role of sequins.   Sequins were already a strong part of the Walco product line as seen here in this 1956 magazine advertisement.    (Note the rhinestone setter ... and younger generations thought the Bedazzler was a new idea!). 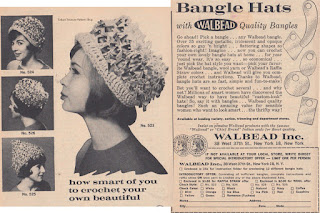 In 1962, Walco made the sequins larger and in a variety of shapes with the hole situated on the edge, versus the middle - creating movement.

There were a couple different magazine advertisements published in magazines as promotion.

And three pattern books were released within a year time period.   And then .... all went silent on the Walco Bangle front, at least from a marketing standpoint.

Walbead Inc remained in business until 1976 when it was turned over to Holiday Co. (who are now defunct as well)

These little gems are certainly not a forgotten part of artful history.   They've moved on, used in a wide variety of crafts and now called paillettes.   If you want to create crocheted hats, you'll have to really search for paillettes with a large enough opening to handle your yarn.  (Or use a hole puncher).

There are several Bangle patterns in the shop, should be wish to browse.

I have quite a few unprocessed magazines from the 1950's and 1960's.  Should I come across more advertisements or information, I'll come back and update this post.